New cameras to watch cameras that watch you 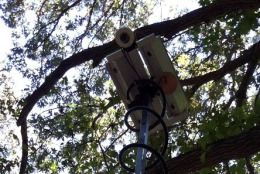 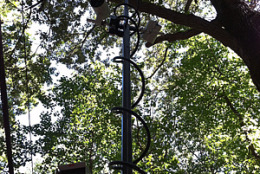 PALMER PARK, Md. – Many people find speed cameras frustrating, and some in the region are taking their rage out on the cameras themselves.

But now there’s a new solution: cameras to watch the cameras.

One is already in place, and Prince George’s County Police Maj. Robert V. Liberati hopes to have up to a dozen more before the end of the year.

“It’s not worth going to jail over a $40 ticket or an arson or destruction of property charge,” says Liberati.

Liberati is the Commander of the Automated Enforcement Section, which covers speed and red-light cameras.

Two weeks later, a speed camera was flipped over at 500 Harry S. Truman Drive, near Prince George’s Community College. Police believe several people were involved because of the weight of the camera itself.

Then in May, someone walked up to a camera on Brightseat Road near FedEx Field, cut off one of the four legs, and left.

“I guess that makes a statement, but we were able to just attach another leg,” says Liberati.

But when someone burned down a speed camera on Race Track Road near Bowie State College on July 3, Liberati and his colleagues began to rethink their strategy.

“It costs us $30,000 to $100,000 to replace a camera. That’s a significant loss in the program. Plus it also takes a camera off the street that operates and slows people down. So there’s a loss of safety for the community,” says Liberati

The Prince George’s County Police Department decided it needed to catch the vandals, or at least deter them.

“The roads are choked, there are lots of drivers on them. I think traffic itself is the cause of frustration (towards speed cameras). But, we have a duty to make the roads safe, even if takes a couple extra minutes to get to your destination. Unfortunately, that’s the Washington area, the place we live in,” says Liberati.

Speed cameras themselves can’t be used for security because under Maryland law speed cameras can only take pictures of speeding, says Liberati.

“We’ve taken the additional step of marking our cameras to let people know that there is surveillance.”

Liberati says the cameras aren’t a case of Big Brother nor a cash grab, police are simply trying to keep the public safe from reckless drivers.