Coronavirus News: Fairfax Co. votes to increase substitute teacher pay | Is it time to get a COVID-19 booster? Which one? | Local cases of COVID-19 | How many in DC region are vaccinated?
Home » College Football » Doerer makes late FG,… 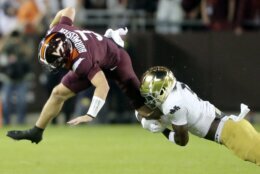 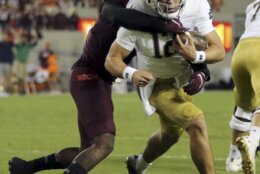 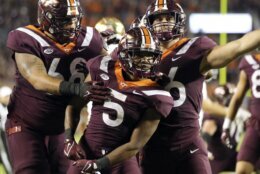 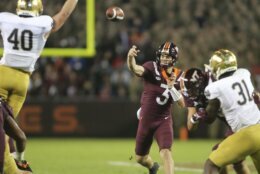 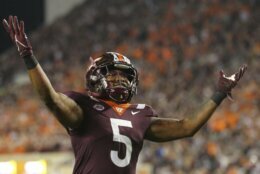 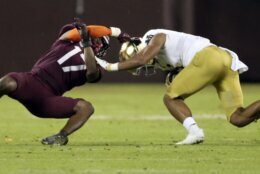 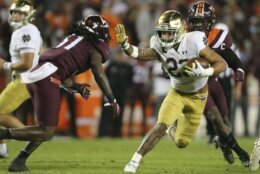 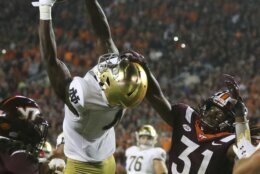 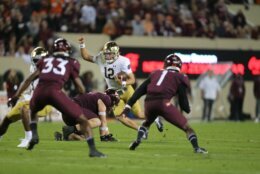 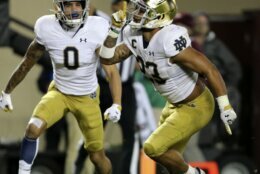 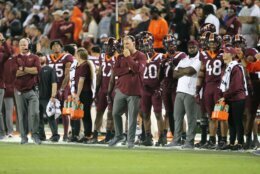 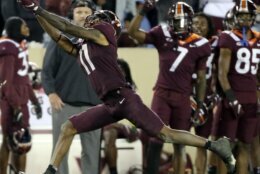 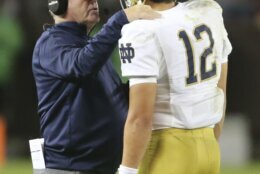 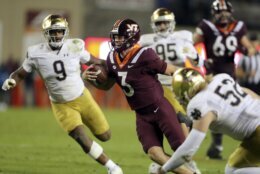 BLACKSBURG, Va. (AP) — Jack Coan’s play in the first quarter for No. 14 Notre Dame on Saturday night got him benched. What he did in the fourth quarter made the Fighting Irish winners, and left coach Brian Kelly gushing about his senior quarterback.

Jonathan Doerer kicked a 48-yard field goal with 17 seconds remaining, capping a dramatic rally to give the Fighting Irish a 32-29 victory over Virginia Tech.

“I’ve been in a lot of games, coached in a lot of games, but I don’t know that I’ve ever coached a group of guys that had such resolve and mental toughness, that regardless of the situation, they just kept playing,” Kelly said. “Unfazed by the circumstances.”

The Fighting Irish (5-1) tied it at 29 on Coan’s 4-yard pass to Avery Davis and a two-point conversion completion to Kevin Austin with 2:26 left. After Notre Dame forced the Hokies to punt, Coan drove them 45 yards in seven plays, and Doerer split the uprights, sparing the Fighting Irish a second straight loss.

Coan “prepared himself mentally to go back in the game and lead two drives,” Kelly said. “You guys should be thinking about great things to write about that guy because that doesn’t happen very often.”

Kelly knew there were things his team didn’t do well against the Hokies, but said he’ll brush off any negatives written because of how it finished.

“What I take from these games is watching a guy like Jack Coan come in under those circumstances and rise above it. It was just, for me, incredibly enjoyable to watch him play,” Kelly said.

The Hokies (3-2) had taken command with an interception return for a touchdown by Jermaine Waller late in the third quarter and another touchdown drive started by an Nasir People’s interception. That drive finished 19-yard run by Braxton Burmeister with 3:55 to play, making it 29-21.

Freshman Tyler Buchner ran for a touchdown and threw for another for Notre Dame (4-2) after replacing Coan to start the second quarter, but his two second half interceptions both turned into Virginia Tech touchdowns.

Kyren Williams ran for 81 yards and one touchdown and caught an 8-yard pass from Buchner for another score the Irish.

Notre Dame: Buchner likely earned himself more playing time among the three QBs the Irish have used this season. Notre Dame ran 13 plays and managed just 27 yards with Coan behind center in the first quarter. Buchner led a 75-yard touchdown drive in is first series in the second quarter.

“He did some nice things like you saw, he’s young. He’s going to be really good,” Kelly said.

Virginia Tech: Connor Blumrick replaced Burmeister in the fourth quarter after Burmeister appeared to hurt his throwing hand late in the third quarter. Burmeister was able to throw on the sideline. Blumrick’s second pass attempt was intercepted when the Hokies tried for a two-point conversion. Blumrick later got hurt on a running play and Burmeister returned to the game.

The Fighting Irish have a week of before facing Southern California in South Bend.

The Hokies face Pittsburgh in their third of four straight home games.