Well, we made it through the first weekend — I think. Survive and advance, right?

The NCAA Men’s and Women’s Basketball Tournaments are in full force. Thoughts as we look forward to the second weekend:

1. “Locals” don’t last long. The stretched-out net of the DMV/Beltway saw Longwood, Virginia Tech, and Delaware lose First Round games while Richmond never led in its Second Round loss to Providence. For those paying attention, Virginia has an NIT Quarterfinal date with St. Bonaventure.

2. Oh those upsets! Four double-digit seeds reach the Regional round, and while Baylor’s the only No. 1 done for the year, Arizona was taken to overtime by a scrappy TCU team. Two of the “upstarts” are that in name only, as Michigan and North Carolina were ranked in the Preseason Top 25 before floundering for much of the winter. There’s Iowa State, whose two wins in the Tournament equal their total from the entire 2020-21 season. Then there’s the ultimate Cinderella in St. Peter’s, who bounced Kentucky and Murray State on their way to Philadelphia and the East Regional.

3. Burned Bracket: I had the Wildcats in the Final Four. I also had Tennessee reaching the National Semifinals. Both were gone by Saturday night. I still have Texas Tech and Kansas, but my picks for the first weekend were so bad that espn.com gave me an “ice icon” for the sheet entered. I will not be collecting any money from that contest. 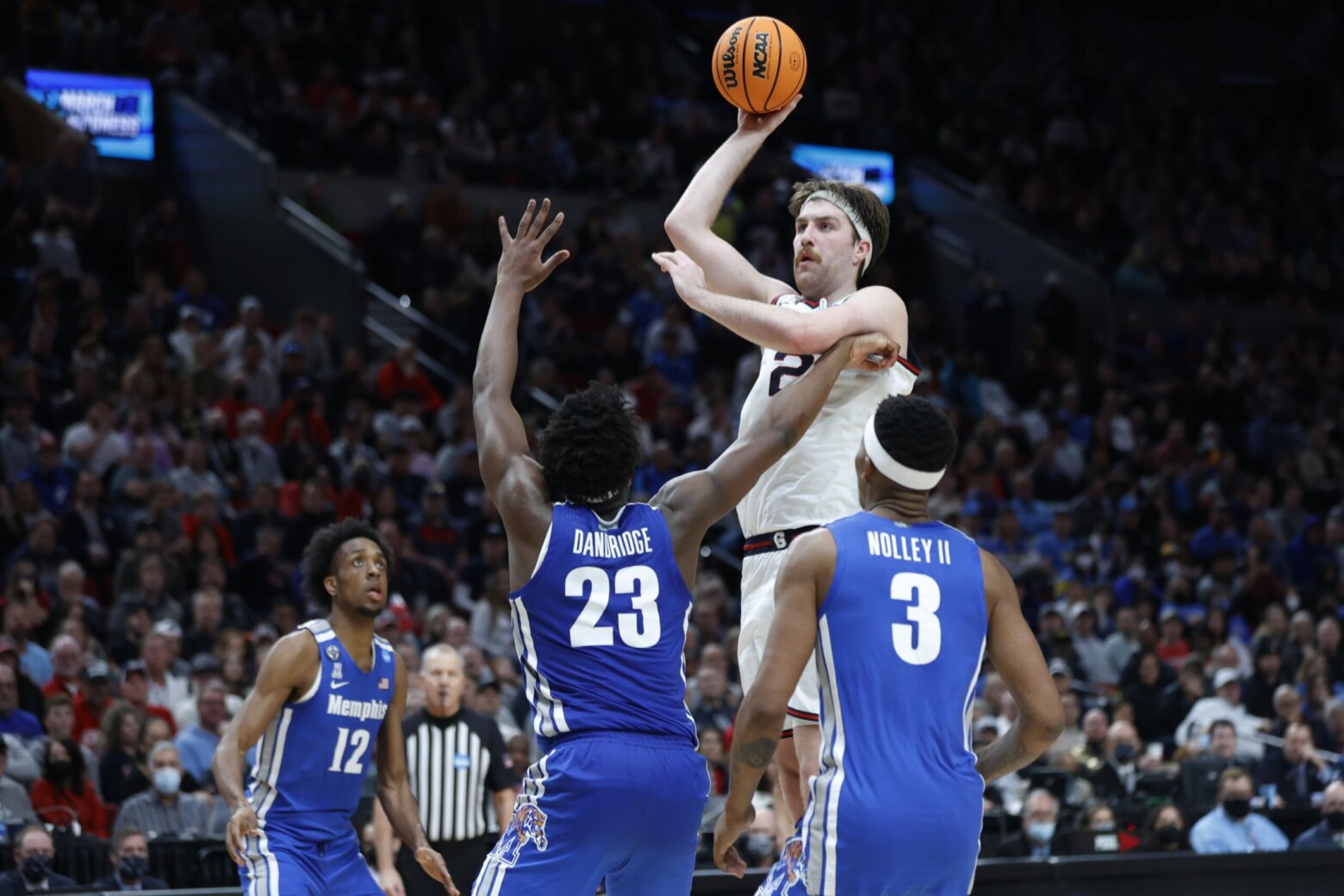 4. Chalk out West: if it’s favorites you’re into and own a Yankees hat plus a Cowboys pullover, the West bracket is for you. But it wasn’t an easy road to San Francisco: overall No. 1 seed Gonzaga staggered through wins over Georgia State (it was tied at 54 before the Bulldogs found their groove) and Memphis (it was tied at 64 with 5:50 to play), while No. 2 Duke, No. 3 Texas Tech, and No. 4 Arkansas emerged from hard-fought Second Round victories.

5. There’s no K in retirement: the season-long lovefest continues as the Blue Devils finished Michigan State with a 20-6 run to end regulation in their 85-76 victory over Michigan State. Coach Mike Krzyzewski’s team is only one week removed from losing the ACC Championship Game but back to back wins have them two steps shy of the school’s first Final Four since 2015. He’s not gone just yet.

6. Shamrock Shake Season: now that we’re past St. Patrick’s Day the availability of the minty green goodness at McDonald’s is going to wane. Enjoy them while you can.

7. The Defense Doesn’t Rest: seven games have been won by a team scoring fewer than 60 points, the most since the field expanded to 68 schools in 2011. Iowa State has two of those wins, one reason why the No. 11 seed is still dancing.

8. Conference Calls: The Big 12 and ACC each place three teams in the Sweet Sixteen with the Pac-12, Big Ten, and Big East sending a pair of schools to the second weekend. While the SEC saw three top-three seeds get bounced over the first four days, the Mountain West went down in flames with an 0-4 showing.

9. Coaching Carousel: Maryland is reportedly interested in Seton Hall’s Kevin Willard, who rebuilt the Pirates into a Big East contender but has a 1-5 record in the NCAA Tournament after their 69-42 First Round loss last Friday. Also on the radar is Notre Dame’s Mike Brey, who attended DeMatha Catholic High School as well as George Washington. Speaking of GW, that vacancy is one week old and the names being bandied about include former Louisville interim coach Mike Pegues, ex-Georgetown coach John Thompson III, and Delaware’s Martin Ingelsby.

10. First Four Follies: Notre Dame continued a tradition of teams that advance from Dayton and win at least one game in the main bracket (at-large First Four teams are 10-12 in the round of 64). The Fighting Irish also had to fly from Dayton to San Diego Wednesday night and be ready to face Alabama by Friday afternoon. Indiana wasn’t as lucky after their cross-country flight from Dayton to Portland.

11. Hate the Late Game: Sunday’s final game tipped off just before 10 p.m., meaning the first weekend of the NCAA Tournament lasted into Monday morning. One understands why the television schedule is staggered the way it is, but can’t they flip the 9:40 Sunday game to 4:40?

12. Winging It: If you’re having wings while watching basketball, it’s always nice to have the proper drumstick to flat ratio. I prefer drums. I know there are others who prefer flats, and that’s fine: more drums for me. The best blend is an 8-to-4 ratio with two ramekins of blue cheese dressing so you can let the wing on deck soak for a little bit.

13. Terps are on a tear. The Maryland Women (23-8) won its two games in College Park, defeating Delaware 102-71 before blasting Florida Gulf Coast 89-65. And while the nation’s seventh-highest scoring team put plenty of points on the board, their play on the other side of the floor is the reason why they’re heading to Spokane. “I thought we really brought our defense. Really that second half, when you talk about limiting them from the three-point line and trying to take that away,” Coach Brenda Frese said. “I thought we continued to share the ball and play at a really high level, which is what you’ve got to do in March.” Diamond Miller (24 points and 9 rebounds against FGCU) was bothered by a knee injury to start the season and Ashley Owusu (64% shooting in the NCAA’s) spent much of Feb. on the shelf with a bad ankle, but both look healthy and their presence on the perimeter combined with Angel Reese in the post will pose problems for whomever they face in Spokane.

14. Who’s Next? Stanford (30-3) is the No. 1 seed in the Spokane Regional and went unbeaten in Pac-12 play. The Cardinal won their first two NCAA Tournament games by 41 and 26 points, and they also boast a presence in the pivot with Cameron Wright (14 points, 8 rebounds, and 3 blocks per game). Friday’s other Regional Semifinal game will feature No. 2 Texas (28-6)-the team that ended Maryland’s run last March in the Sweet Sixteen-and the winner of Monday’s game between No. 3 seed LSU (26-5) and No. 6 Ohio State (24-6).

15. Other Locals- Howard lost its First Round game to overall No. 1 seed South Carolina 79-21 (and it wasn’t that close) while American slipped at Michigan Saturday 74-39. Virginia Tech was upset by No. 12 seed Florida Gulf Coast 84-81 Friday as the Eagles hit 15 three-pointers. Longwood’s run ended with a 96-68 loss to Bridgeport No. 1 seed NC State.

16. What home court? There are those who say the women’s tournament cooks the books by having its top sixteen schools host the first weekend. Tell that to Iowa, a No. 2 seed that lost on its home floor to No. 10 seed Creighton. But at least Omaha’s just a four-hour drive from Iowa City. Baylor also wants a word, as the No. 2 seed Bears fell at home to South Dakota- and Vermillion is a 13-hour drive from Waco.