This one meant a lot in mid-November.

Aliyah Matharu made a go-ahead 3-pointer with 5:06 to play and two more in the closing minutes, freshman Rori Harmon scored 21 points and No. 25 Texas jolted third-ranked Stanford 61-56 on Sunday.

The Longhorns embraced and hollered with joy following the win, then went into the crowd for more fun. Texas (2-0) excelled in its first big nonconference test after beating New Orleans 131-36 in its season opener Tuesday.

“We just weren’t gritty enough down the stretch,” Hall of Fame Stanford coach Tara VanDerveer said. “… I hope that this game gets everyone’s attention.”

The Cardinal (1-1) led 40-35 in a defensive matchup going into the final 10 minutes before Matharu took over. She finished with 17 points.

Matharu, who joined the Texas program after transferring from Mississippi State, hit 3-pointers at the 3:08 and 1:39 marks to help seal it.

“Obviously losing is not fun but I think that there’s a lot that we can learn from it, and especially knowing areas that we need to improve are definitely areas that we saw exposed today,” Hull said. “… I think later on in the season we’ll look back on this game as a blessing in disguise as much as we don’t like it right now.”

VanDerveer went with an experienced starting lineup featuring Hull and twin sister Lacie, along with sixth-year senior Anna Wilson after the Cardinal’s balanced 91-36 victory over Morgan State on Thursday.

VanDerveer challenged her women to take better care of the ball, but Stanford struggled to do so committing 20 turnovers in an uncharacteristically sloppy performance. The Cardinal shot just 4 for 27 from 3-point range.

“I think the full-court defense the pressure kind of got us out of whack,” VanDerveer said.

Both teams needed about a quarter to warm up for the noon local time tip-off — Texas missed seven straight shots with a scoring drought of nearly six minutes midway through the opening period and Stanford had nine consecutive misses to go almost six minutes between field goals by Lexie Hull.

The young Texas team with two freshman starters struggled with its perimeter shooting and didn’t make a 3-pointer until Matharu hit with 6:53 remaining in the game.

The teams were tied at 10 after one quarter with the Cardinal shooting 3 of 13 overall to 4 for 16 by the Longhorns.

Stanford, which beat Texas in the 2016 NCAA Tournament, knows teams will bring their best.

“We welcome it,” Jones said. “I don’t know if we feel it on a day-to-day basis but I think we know that it’s there winning last year. We welcome the challenges.”

SHOW ME THOSE RINGS

Stanford celebrated its national title with a video highlight show, ring ceremony and banner unfurling after the game. The Cardinal beat Pac-12 rival Arizona 54-53 for the program’s third women’s basketball championship and first since 1992.

Stanford had won its last 21 games dating to last season before Sunday’s defeat.

VanDerveer will wear her ring on a necklace. She looked at Jones’ jewelry afterward and told the star guard, “You earned it.”

“Again, I’m exceedingly proud of last year’s team,” VanDerveer said. “Through the tournament we really never played against this style.”

Stanford: The Cardinal were 0 for 8 on 3-pointers in the first period and missed 10 from deep before Prechtel connected at the 4:06 mark of the second quarter. That was the only 3 of the game until Lexie Hull connected with 1:40 remaining in the third. … Cameron Brink had three of Stanford’s 10 blocked shots.

Texas: Hosts Southeast Missouri on Wednesday in a quick trip home before a road trip to face Tennessee in Knoxville next Sunday. 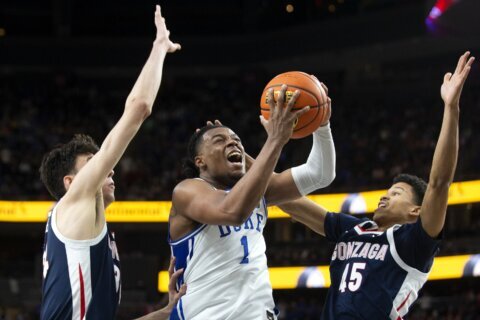