Many hoped the 2021 ACC/B1G Challenge would potentially mark the rekindling of the flame between Maryland and Duke. That, however, won't be the case.
Listen now to WTOP News WTOP.com | Alexa | Google Home | WTOP App | 103.5 FM

Many hoped the 2021 ACC/B1G Challenge would potentially mark the rekindling of the flame between Maryland and Duke. That, however, won’t be the case.

The Maryland Terrapins men’s basketball team will welcome the Virginia Tech Hokies to College Park in 2021 for the latest edition of the ACC/B1G Challenge, CBS Sports Jon Rothstein first reported.

This will be the team’s first matchup as part of the challenge between two of the nation’s top conferences. Since joining the Big Ten for the 2014-15 season, Maryland is just 1-6 in the challenge. The Terps have faced North Carolina, Virginia (twice), Pittsburgh, Syracuse, Notre Dame and Clemson. The only victory came against the Fighting Irish in 2019.

Maryland is coming off an interesting campaign, as the team made it to the Round of 32 in the NCAA Tournament as a No. 10 seed, but compiled just a 17-14 record while going 9-11 in conference play. It was a young team that had just lost stars Jalen Smith and Anthony Cowan.

Now heading into the 2021-22 season, expectations are once again high for the Terps. While the team’s overall makeup will depend on Aaron Wiggins, Eric Ayala, and Darryl Morsell returning — all three are exploring their NBA Draft options and Morsell is also in the transfer portal — the depth Mark Turgeon has from returning players and transfers is promising.

As for the Hokies, that group is coming off a 15-7 season with a strong 9-4 record in the ACC. Mike Young’s team lost in the first round to Florida in the NCAA Tournament, but consistent success over the years means it will be a battle for Maryland.

The matchup will also bring back the local Maryland connection of Mike Jones, who is now an associate head coach at Virginia Tech. Jones was the long-time head coach of D.C. area high school powerhouse DeMatha Catholic for nearly two decades. 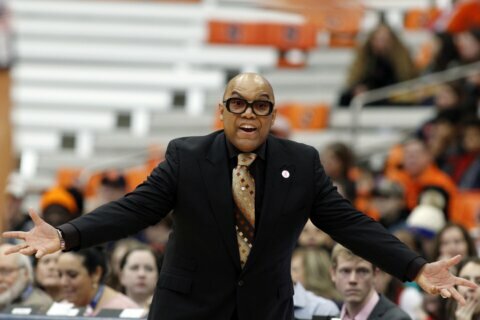