John Thompson remembered for indelible legacy on and off the court

Hall of Fame coach John Thompson was ahead of his time.

Not only did Thompson win basketball games, including a championship with Georgetown University, but he also stood against racial and social injustice when it wasn’t acceptable for sports figures to use their platform to speak out.

“Basketball was what he used to get everyone’s attention to accomplish what he wanted to accomplish,” said his son, John Thompson III, with words from the autobiography on his father, “I Came As a Shadow.”

“People remember pops for his actions more than they do for his wins. And that’s not a bad thing.”

That is a strong statement, because Thompson’s Georgetown teams won a lot. By 1984, he became the first Black head basketball coach to win an NCAA championship.

He put together a record of 596-239, including 20 NCAA Tournament appearances and four NIT appearances in 27 years in charge of the Hoyas.

“He always used to say, ‘If I had the luxury of just being a coach, we might have won a few more championships,'” said Thompson III. “Unlike a lot of people, it was not just about the coaching. It was about his players, how he could help shape their futures. That’s what was important to him, because he was provided opportunities and he was also not provided other opportunities. He wanted to make sure other people following him had both the chances he had and didn’t have.”

Before the start of Georgetown’s home game against Boston College in 1989, Thompson walked off the Capital Centre court in protest of NCAA legislation denying aid to students who did not meet minimum academic standards.

Estimates at the time revealed 90% of the roughly 600 students who would be negatively impacted were Black.

Thompson was not arguing the need for academic standards but was concerned because if the rules had been in place when he was growing up, he would not have had the opportunity to receive a college education.

He also viewed himself as a teacher first and would often take up practice time holding discussions with players about current events.

Fast forward to last summer’s protests against police brutality and racial inequality — coaches’ voices were heard, and athletes elevated their role as activists.

In August, NBA and WNBA games were called off in protest. And Thompson, who always tried to challenge minds while winning games, was able to see the growing influence of the sports world before he died in August at 78.

“Toward the end of his life, it made him extremely proud to see the number of athletes and coaches and people in the sports world that were willing to stand up, willing to speak up and to take a stand,” said Thompson III.

“If you look back, traditionally, very few people were able to take that risk and take that chance and become vulnerable by speaking out. He was so pleased to see the different figures involved in so many civic activities.”

The Wizards and Mystics, who Thompson III works with as vice president of player engagement, were very active last summer in addressing social issues.

To commemorate Juneteenth, when slaves were freed in 1865, and to support Black Lives Matter, Wizards and Mystics coaches and players led a march from Capital One Arena to the MLK Memorial.

“We are not going to stop working to impact change,” said Thompson III.

The Wizards and Mystics have also formed an athlete’s council to continue work on issues important to them, ranging from voter registration to social injustice.

“This group is going to stay active, they are bright and extremely committed.”

Editor’s note: This story has been updated to reflect that John Thompson became the first Black head basketball coach to win an NCAA championship in 1984. 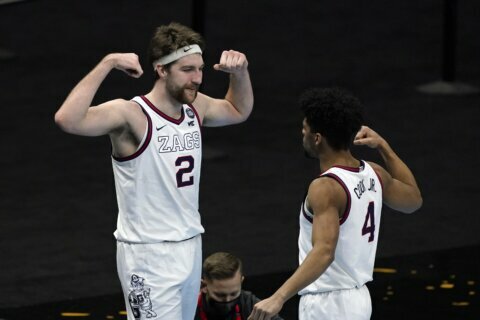