March Memories: What exactly IS a Penman?

It’s supposed to be the week of the Regional Semifinals and Finals in Division I men’s college basketball. To be…
Listen now to WTOP News WTOP.com | Alexa | Google Home | WTOP App | 103.5 FM
(1/3) 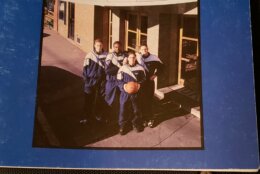 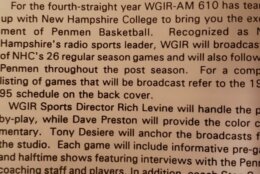 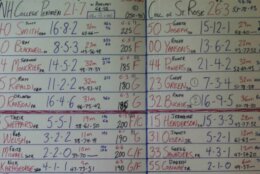 It’s supposed to be the week of the Regional Semifinals and Finals in Division I men’s college basketball. To be one of the last 16 schools standing is a reachable badge of honor for the Power Five schools, a dream come true for mid-majors, and immortality for one-bid schools.

Covering Big East, ACC, and Big Ten schools over the years, it’s always something special to still be heading to press conferences and interviews that second week. It’s a thrill to be thinking of the magic still to come, while at the same time, many of my colleagues are carrying out season post-mortems.

But a couple rungs down the ladder, in Division II, this week is more than a stepping stone, it’s the destination. And for four winters after I graduated from college, following a team fighting for a spot in the Elite Eight was my world.

Working at WGIR-AM (610 on your dial) in Manchester, New Hampshire, I covered three schools playing Division II at a high level. Franklin Pierce College (now a university) was an hour away from the station in Ringe. It had recently made the transition from NAIA, and was coached by the energetic quote-machine Art Luptowski. St. Anselm College was on the west side of Manchester, guided by Keith Dickson, who appeared to be warming up for taking the Division I University of New Hampshire job (Dickson had played for the Wildcats). And then on the north side of the city there was New Hampshire College, the school whose games we carried on WGIR.

If you’re unfamiliar with the name, it’s because the school is now known as Southern New Hampshire University. They were, and are, called the “Penmen,” dating back to the university’s roots as the New Hampshire School of Accounting and Secretarial Science in the 1930s.

Led by coach Stan Spirou, NHC advanced to the Elite Eight three times during my tenure at WGIR, and fell to the eventual regional champ in the fourth year. St. Anselm also made the NCAA Tournament four times in that span, while Franklin Pierce made three appearances; and in between early-season tournaments, regular season and conference/NCAA Tournament play it wasn’t odd to see those three schools meet each other three, four or five times in a season.

During that time, I served as the studio host, as well as color analyst for WGIR’s Penmen broadcasts; and on its way to averaging 26 wins, the team treated me to plenty of thrills and chills. From a steal and three-pointer in the final seconds by Rob Paternostro to win the NECC Tournament, to a buzzer-beating bucket by Matt Ripaldi a week later to capture the Northeast Regional, those Penmen were made for March moments.

I may have even written a song: “Here We Go Penmen!” that used the melody of Looking Glass’s “Brandy” after they won their third straight regional the following year (“There’s a man. His name is Stan. To win it all has been this man’s plan.” — I mean the song writes itself).

Somewhere in those four years, I also saw my high school alma mater Manchester West finally get that 14-4 season and cut down the Class L nets, while also following Syracuse’s improbable path to the 1996 Final Four.

Meanwhile I covered two brothers of West High classmate Tim O’Connell; Jeff played at NHC while Todd started for St. A’s (as fate would have it I covered Tim’s nephew Jake Layman two decades later at Maryland). The point guard my last year covering the Penmen? Current Terps assistant Bino Ranson. Stan Spirou’s now retired, and watches his son-in-law Ryan Day coach Ohio State football, while Art Luptowski has moved on to become an advance scout in the NBA. Keith Dickson? He made St. Anselm his destination job instead of a stepping-stone, and has led the Hawks to a pair of Elite Eights. With a third Regional Title he gets a song…