After a disappointing campaign, Maryland knows the only way to get back to March Madness is to win the Big Ten Tournament.
Listen now to WTOP News WTOP.com | Alexa | Google Home | WTOP App | 103.5 FM

WASHINGTON – Somewhere, on paper, this seemed like a great idea, especially with that “grow the footprint” guy in the conference office. What better way for the Big Ten to build its brand than to plant the flag at “the world’s most famous arena,” Madison Square Garden?

Forget that just three of the 14 Big Ten schools are within 300 miles of New York City (for those counting, College Park is actually closer to the Big Apple than State College, Pennsylvania by about 14 miles). Never mind that instead of waiting for the Barclays Center in Brooklyn to open up, or choosing to play in the usually available Prudential Center in Newark, they had to move the tournament up a week because the Big East has MSG locked up through 2025. That’s why we had conference games played the first weekend of December. And that’s why there could be teams working on a two-week layoff going into the NCAA Tournament.

And let’s not forget the residual effect of the men’s tournament sucking all of the oxygen out of the room while the women’s tournament takes place in Indianapolis at the same time. (The league should have considered moving the women’s tournament to the next weekend to give it maximum exposure). Of course, if the conference lands an extra at-large team than expected and if the Big Ten dominates the first weekend of the NCAA Tournament, this will turn out to be a stroke of genius. Thank goodness the tournament returns to Chicago next March.

Fun Fact: While the top seed has won the tournament eight times, don’t sleep on the No. 6 seed which is 29-19 over the years with one title and three finals appearances. More recently, the No. 8 seed (hello, Maryland) has more tournament wins (seven) than the regular season champ (six) over the last five years.

Michigan State won its last 12 games to earn the No. 1 seed for the first time since 2012. The Spartans led the conference in scoring, shooting and rebounding — the only thing they don’t do well is take care of the ball (last in the league in turnover margin).

Purdue was in first place for most of the season before some late hiccups, but there’s no better team in the Big Ten at shooting 3-pointers. The Boilermakers are also a year older than the team that went one-and-done as the top seed last March.

Ohio State beat both the Spartans and Boilermakers under Coach of the Year Chris Holtmann, but somehow got swept by Penn State.

The Buckeyes’ Keita Bates-Diop was a big reason for OSU’s resurgence. The junior ranked second in the conference in scoring and rebounding on the way to being named Big Ten Player of the Year. Myles Bridges may not have the numbers, but the Michigan State sophomore is arguably the most talented player in the league and is the most productive one when he needs to be. Purdue forwards Vincent Edwards and Isaac Haas are the typical skilled-but-gritty big men midwest teams seem to run off of the assembly line each winter. (Perhaps we can get a few shipped to College Park.)

Nebraska is in an odd spot as the No. 4 seed. Despite winning eight-of-nine down the stretch, the Cornhuskers don’t have a great at-large profile: credit a non-conference strength of schedule that ranks 297th in the nation as one reason why ESPN Bracketologist Joe Lunardi has them as one of the “first four out” in his latest projection. In the quarterfinals they’re likely going to face No. 5 seed and 15th-ranked Michigan, which brings a five-game winning streak into Madison Square Garden, including a dismantling of Maryland last Saturday. An early exit from MSG for coach Tim Miles’ team could mean banishment to the NIT.

Meanwhile, the Nebraska bench has become a lightning rod for their antics that, depending on your age and mentality, could be called either “creative” or “obnoxious.” It’s cute the guys at the end of the pine pantomimed Olympic bobsledding after a big bucket, but beware — the last team to pull such shenanigans was Monmouth, and they were left out of the field despite a 27-7 mark two seasons back that included wins over UCLA, Notre Dame and Georgetown.

Looking at Wednesday’s “First Round”

One of the costs of doing business in a 14-team league is the unfortunate bracket in which the first day features a doubleheader of despair. Unlike a 12-team format where you potentially have bubble teams battling and at worst a 5 vs. 12 game where one of the schools is headed somewhere, we get the “dreaded first round.” (I’m checking with legal on the rumor that we have to refer to it as “dreaded” at all times, just as we seem required to associate “lowly” with Rutgers.)

Minnesota, Illinois, Iowa and “Lowly Rutgers” went a combined 15-57 in league play. These four schools will square off with perhaps the bad news being that two of those schools’ fan bases will have to sit through 40 more minutes of watching their sub-.500 squads fumble about. The ACC, SEC and Atlantic 10 subject us to this as well; it’s commonly referred to by the media as “the day we pick up our credentials and test the phone lines while watching as little actual hoops as possible.”

Looking at Thursday’s Second Round

The Terps won the lone regular season meeting between the two schools, 68-63, on Super Bowl Sunday in a game where they blew a 10-point halftime lead. Anthony Cowan Jr. scored 23 points in 39 minutes that afternoon and, for the record, the sophomore has played in 234 of 240 possible minutes since. In a season where injuries and last-minute losses have all but dashed the Terps’ NCAA hopes (a bid is coming only if they cut down the nets at MSG Sunday), Cowan has been the major bright spot, ranking in the top three of the Big Ten in assists and steals while leading the conference in minutes played. His play, along with that of Kevin Huerter (the two combined for 14 of the team’s 23 field goals in the win over the Badgers), will be paramount if the Terrapins want to be playing in the quarterfinals Friday.

Wisconsin endured a winter of discontent as well. Instead of thinking about a potential third-straight trip to the Sweet 16 under head coach Greg Gard, the team that received votes in both preseason polls is likely going to finish with a losing record for the first time since 1998. But they did conclude the regular season with four wins in six games (and their two losses were against strong Michigan and Michigan State). The Badgers’ bright spot is junior Ethan Happ. The 6-foot-10 forward scored 18 points in College Park earlier this month and leads the team in scoring, rebounding, assists, steals and blocks (but is just a 9-percent shooter from 3-point range — slacker). Freshman guard Brad Davison has given the Badgers feast (30 points against Michigan State) and famine (five points on 1-4 shooting earlier in the week at Northwestern), but is their second scoring option. At the beginning of February, it appeared as though Wisconsin was a year away from being a factor; there’s no reason not to expect they’ll be a handful Thursday. 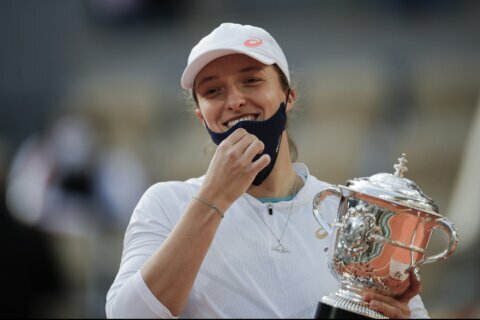