ATLANTA (AP) — When the Atlanta Hawks were excluded from the bubble last summer, Trae Young stewed at home.

He watched games on television, enviously tweeted about what he was missing, and longingly visualized what it would be like to play a starring role when it really matters in the NBA.

Now, he’s got his chance.

Talk about rising to the occasion.

Young has joined an extremely rare group of point guards and guided the Hawks to a 3-1 lead in their opening-round playoff series against the New York Knicks.

Atlanta will try to wrap it up Wednesday night in Game 5 at Madison Square Garden, where a fan spit on Young as he inbounded the ball the last time he was in New York.

No worries on Young’s end. That just shows how much he’s gotten under the skin of the Knicks and their fans.

He has become just the fourth player in NBA history to average at least 25 points and 10 assists in his first four career playoff games.

The others: Oscar Robertson, Kevin Johnson, and Stephen Curry.

The 6-foot-1 Young has befuddled the Knicks with a dazzling array of moves and passes. When they sag into the lane, he’ll pull up for the jumper. When they crowd him on the outside, he’ll take it to the hoop. When others are open — and the Hawks have plenty of shooters — Young delivers passes in about every way imaginable.

“He really doesn’t have a weakness,” said interim Hawks coach Nate McMillan. “He takes what the defense gives him.”

As good as he is as a shooter — Young’s range is roughly just inside the half-court line — his passing maybe even better.

He even amazes himself at times.

“I always know in my mind where I want to go with the ball,” Young said. “Sometimes, it trips me out the way it goes. A couple of games ago, I did a behind-the-back pass to Tony (Snell) in the corner. I knew where I wanted to go with it. I just hoped it got there. The fact that it got there, I was pretty tripped out by that.”

The charismatic Young has never shied away from the spotlight, making it clear from the day he arrived in Atlanta that he was more than willing to be the face of a team that has largely been a forgotten NBA outpost.

Even though the Hawks made the playoffs for the first time since 2017, most of the hype was on the Knicks — a flagship franchise in the league’s biggest media market that ended an eight-year postseason drought of its own.

The underdog role suited Young well. He’s often griped about how the Hawks are overlooked, from a lack of national television appearances to him being passed over for a spot in this year’s All-Star Game in his home city.

“We have been disrespected all this year and overlooked a lot,” Young said.

With Young as the centerpiece of a massive overhaul, the Hawks went 49-100 during his first two seasons in the league. Last year, after the season shut down because of the pandemic, Atlanta was one of eight teams that didn’t take part in the Disney World bubble.

It was tough for Young to watch.

“I started training the first day everyone got in the bubble and started playing,” he recalled. “Being at the house late at night, watching those games, seeing all those playoff games, seeing guys in the play-in games, even when they were just playing (the last few regular-season) games, for me it was frustrating. I wish I could have done more to help our team get there. For us to be here now means a lot to me. And this is just the beginning.”

Young is seemingly picking up new fans with every stellar performance.

After the Hawks romped to a dominating victory in Game 4, Hall of Famer Isiah Thomas chimed in on Twitter.

McMillan has worked with Young to cut down on his turnovers. After averaging 4.14 per game during the regular season, he’s given up the ball only 11 times in four playoff games.

“He’s showing growth in managing and running a team,” the coach said. “He has to cut down the turnovers. He’s too good of a passer to have five or six turnovers a game. Two is OK. But five or six is a big number for a guy who passes as well as he does.”

Young was picked fifth overall in 2018 out of Oklahoma, going to the Hawks in a draft-night deal that sent All-Star Luka Doncic to the Dallas Mavericks and also brought Atlanta a future first-round pick (which was used for Cam Reddish).

It is a trade that is still hotly debated around the league, but neither team is complaining about who they ended up with.

No matter what, Young and Doncic will surely be linked for the rest of their careers.

That’s not an issue for Young.

He welcomes the attention. Craves it, actually.

“I want to do something special” he said. “I want to be different. This is a fun opportunity, a fun stage to really do that.” 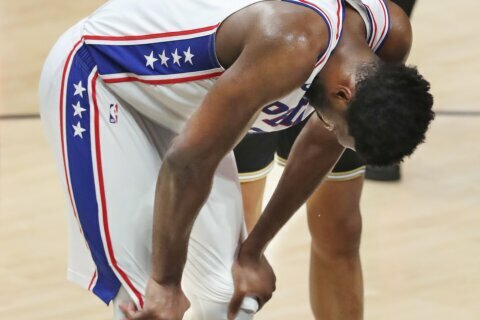