Kent Bazemore, whose Atlanta Hawks are squaring off with the Washington Wizards in the NBA Playoffs, has taken an unconventional route to his place in the league.
Listen now to WTOP News WTOP.com | Alexa | Google Home | WTOP App | 103.5 FM

WASHINGTON — The Atlanta Hawks are running a three-point shooting game at the end of practice in the third-floor gym of the sparkling new John Thompson Jr. Center on the Georgetown University campus.

The Washington Wizards held on to edge Atlanta Hawks 103-99, taking a 3-2 lead in the first-round series. See photos.

Everyone is going about their business routinely except one player: Kent Bazemore, the loudest one on the floor in both projection and attire. Sporting an auburn T-shirt underneath his light gray practice jersey, he hoots, shimmies and flutters his arms in some kind of ritual as his group of four rotates around the arc, laughing, talking trash. His shoelaces are neon pink.

Also the only lefty on the floor, Bazemore stands out in person in every way he doesn’t on paper. In four years in the league before this one, mostly as a bench player, Bazemore had earned $5.2 million, or what LeBron James earned for roughly 19 games of work last season. Then, Bazemore and the Hawks sent a collective gasp through the NBA free agent market, signing a four-year, $70 million deal that paid him $3.6 million more than two-time defending MVP Stephen Curry this season.

How all of this came to be is a study in timing, hard work and a willingness to do things others would not. That rare combination has made Bazemore one of the most interesting — if not one of the most well-known — players in the NBA.

Now 27, Bazemore graduated from Bertie High School in Windsor, North Carolina. Despite the statewide reputation as a basketball hotbed, Bertie County had not produced an NBA player before Bazemore. He didn’t attend a top flight basketball school, ending up at Old Dominion, across the border in Virginia.

As a freshman at ODU, the Monarchs made the CollegeInsider.com postseason tournament, or CIT, a competition that selects teams once the NCAA Tournament and NIT fields have been filled. While it doesn’t garner much national attention, it can be a big deal for a mid-major school like ODU, which went on to win all four games and take the tournament title.

“He showed glimpses of what was to come during the 2009 CIT,” said College Insider Vice President Angela Lento, who first saw Bazemore play in the second round against Belmont, led by fellow freshman future NBAer Ian Clark.

“I came away thinking he was going to be a First Team All-CAA performer before his career at ODU was over,” Lento added.

In Bazemore’s junior season, he won the Lefty Driesell Award, a recent advent given to the nation’s top defensive player. He was the first mid-major player to earn the award, which was won by Kentucky star freshman Anthony Davis in Bazemore’s senior season. The creators and presenters of the award? CollegeInsider.com.

“By his junior season, he had become one of the top defenders in America,” said Lento, who has been a voting member since the award’s inception. “I thought his size and ability on the defensive end would give him a chance of making it in the NBA.”

But not everyone felt the same way.

“I remember talking to one NBA scout who didn’t think he had any shot of playing in the league, but I don’t think he followed his career and his development that closely,” Lento said.

Davis went on to be the first overall pick in the 2012 NBA Draft; Bazemore went undrafted. At 6-foot-5, without overwhelming athleticism or any one particular stand-alone skill, he’s the kind of player that would often see the NBA dream die there, perhaps fated to a career scrapping in Europe and the NBA Summer League for a look. But Bazemore caught on with exactly the right team at what turned out to be exactly the right time.

Forty-eight hours before he was going to hop on a plane to play professionally in Ukraine, Bazemore signed with the Golden State Warriors, who inked him to a two-year contract after he had worked out with the team in the Las Vegas Summer League. He spent the next two seasons bouncing back and forth between Oakland and the D-League affiliate in Santa Cruz, but was making his mark around the league, even when he wasn’t playing.

Before the Monmouth bench captured America’s hearts and rankled its cranky columnists, there was Bazemore. His improvised bench celebrations — layered perfectly into the backdrop of Warriors highlight reels — made him a crowd favorite and prompted 2K Sports to motion capture his movements to include in the NBA 2K14 video game.

Bazemore also made an impact away from the court. As ESPN’s Ethan Sherwood Strauss revealed in a piece last year, Bazemore was instrumental in helping Under Armour land Steph Curry as a client. Then a company still looking to make its first major splash in the NBA market, they took a chance on Bazemore, thanks to some prodding from his agent, Austin Walton.

“I had the idea that Under Armour would be a really good fit,” Walton said. “I kind of pitched the whole crazy idea with Steph Curry.”

The crazy idea was that by showering Bazemore with a bunch of extra gear — which he happily wore and distributed to teammates — the company would have a shot at Curry and Klay Thompson, each of whose shoe contracts were expiring that year. They landed Curry, who went on to win the MVP each of the past two seasons.

Under Armour was a natural fit for both Bazemore and Walton, who knew company executive Ron Johnson through a middle and high school friend.

“Kent was a DMV kid going to school at Old Dominion,” said Walton, who grew up in Newport News. “So am I, because I’m from Virginia, and that’s where Under Armour is kind of laying its grassroots.”

Walton also pushed Bazemore to continue to embrace his off-court personality. Since coming to Atlanta in 2014, Bazemore’s become known for the Baze Gaze, his unique brand of video bombing teammates’ interviews. Wandering in from the side, he stops in the frame, smiling, then turns to the camera and drops his head, eyes gleaming through the fourth wall, a knowing smirk on his face.

That’s why it’s not surprising that Bazemore would add a workout routine to his offseason rotation that most professional athletes wouldn’t dare touch.

When he made the move to Atlanta, Bazemore’s fiancee Samantha had to give up her career and start fresh in a new city. She found solace — and, eventually, a new calling — in barre, a highly focused workout with roots in ballet. One day, Bazemore tagged along for one of her classes and found himself in for more than he had bargained.

“It’s very strenuous, and the women in the class make it look so easy,” Bazemore said. “You talk about world-class athletes going into a class for an hour straight and basically crawling out of there.”

Like pilates or yoga, barre is often thought of as a workout for women. And unlike the DeMatha football team, there aren’t many groups of men opting in just yet.

“In the nine classes that I teach, I will probably have three-four men total in my classes, in a good week,” said Emma Hebert, a barre instructor at FlyWheel Sports in Washington. “And a lot of times, when I do have a guy in class, they’re coming with their girlfriend.”

That’s just the situation Bazemore found himself in. But it’s the type of life experience he relishes and thrives on.

“I think you grow as a person when you’re most uncomfortable,” he said. “Being the only guy, 6-foot-5, in a room full of women where your fiancee is teaching the class, is very, very uncomfortable. People expect you to come in there and straight smoke the class, but you’re shaking, falling out of poses, taking breaks, drinking water. It’s very humbling. You need a dose of that here and there in your life to keep you grounded.”

The workouts feature many small range of motion movements repeated over and over, as opposed to the major muscle groups most commonly focused on in NBA workouts.

“The first thing I thought when I did barre was that it reminded me a lot of the physical therapy exercises that I did,” said Hebert, who suffered a knee injury as a young dancer, citing the resistance bands and small, controlled movements that make up the class. “I think it’s really great for injury prevention and just kind of keeping the wear and tear off your body.”

It should come as no surprise, then, that Bazemore has played 75, 75 and 73 games the past three seasons. The lone injury that caused him to miss time this year was when he banged his knee on the floor in February.

“I think you grow as a person when you’re most uncomfortable.”
— Kent Bazemore

In addition to helping him stay healthy, though, Bazemore credits barre with his defensive stance, the ability to stay ready, knees bent, reacting quickly enough to stave off some of the best scorers in the league.

“Being in the stance and being able to move quickly is pivotal,” he said. “I definitely think it’s helped with me staying low, guarding smaller players, being able to kind of get down on their level to use my length and quickness to stay in front of them.”

He will need all the help he can get this series, as he draws some of the responsibility for slowing down John Wall — another University of Kentucky star drafted No. 1 overall — who dominated Game 1 with 32 points and 14 assists. While Wall enjoyed a couple highlights at Bazemore’s expense, the latter posted a quietly solid game, scoring 12 points along with three rebounds and three assists in 28 minutes, over which his plus-minus (+9) was actually better than Wall’s (+8).

Bazemore may relish the challenge of trying new things and breaking the mold, but that doesn’t mean he expects any of his teammates to follow suit, whether it be his off-court antics or his non-traditional workout programs.

“Most of the time, they look at me like I’m crazy,” Bazemore said of his teammates. “But there’s no set way to live life. You don’t have to do ordinary or do what everyone else does. You can kind of pave your own way and do what you want to do.”

That approach and attitude are what drew Walton to Bazemore in the first place. Walton was still just 27 when he signed Bazmore, just getting his footing in the agency world. They took a chance on one another, just as Under Armour did by signing him. By being willing to take a different approach and doing things his own way, Bazemore has forged a career few saw possible.

“He’s always the most optimistic person,” Walton said. “He believes that the greatest thing is always going to happen, even if it may or may not be realistic. And a lot of great things have happened to him because of that.” 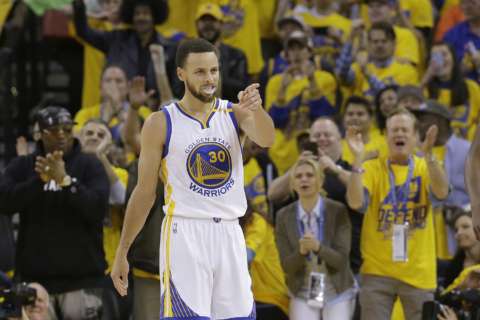 A ‘Golden’ state: On the rise of Steph Curry 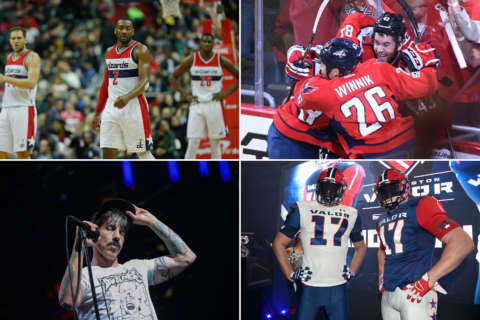 Watch: How Verizon Center goes from hardwoods to hockey rink 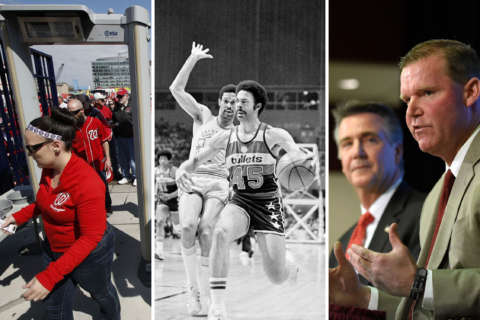 Why can’t DC teams get out of their own way?