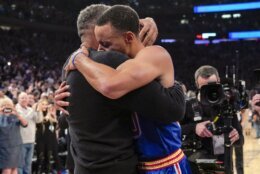 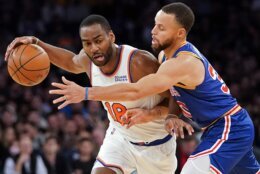 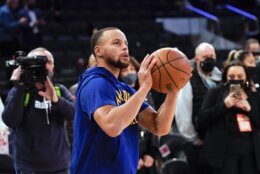 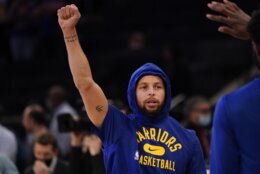 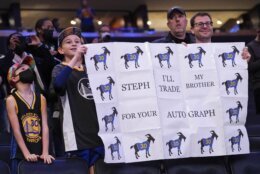 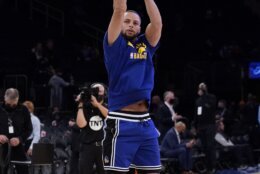 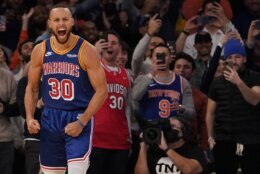 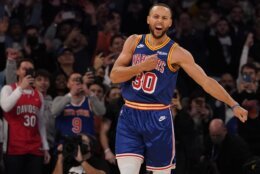 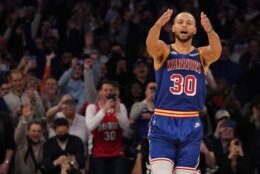 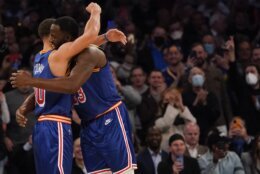 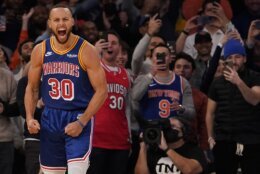 NEW YORK (AP) — Stephen Curry never wanted to say it himself, even if others have been saying it for years.

He refused to call himself the greatest shooter of them all until the numbers said so.

“I got that baby,” Curry said, raising his arms high in the air.

He struck the same pose hours earlier Tuesday night after shooting his way to the top of the NBA record book with his 2,974th 3-pointer in the first quarter of the Golden State Warriors’ win over the New York Knicks.

Curry broke the record set by Ray Allen, who held it for 10 years after passing Reggie Miller. They were both at the game and presented Curry with a jersey with a 2,974 on the back.

That number could be 4,000 or more by the time Curry is done playing a game in a way that barely existed before him.

“He has totally changed the game of basketball as we know it,” teammate Draymond Green said.

Curry hit the record shot from the right wing with 7:33 remaining in the first quarter, waving his arms toward the sky, blowing a kiss and pounding his chest as he jogged backward down court. The Warriors then committed a foul and quickly called timeout to let the celebration begin.

Curry went and embraced his father, Dell Curry, who was seated along a baseline, while Bob McKillop, his coach at Davidson, stood in the stands and beamed alongside Larry Riley, who drafted Curry for the Warriors. Then came a hug from Green, among others and, finally, Curry trotted back across the court for a long embrace and a few congratulatory words from Allen.

Curry already owns two of the top three seasons for 3-pointers — including the only season with 400 3s — and now has the career record.

It came at Madison Square Garden, where Curry had one of his early-career highlights on Feb. 27, 2013, when he made 11 3-pointers and scored 54 points. He’s gone on to win two MVP awards and three championships while becoming one of the biggest, most popular stars in the game.

Fans waited long afterward while he conducted a postgame interview on the court, chanting “MVP! MVP!” when he finished.

“I think fans are attracted to him just because of his humility and his story and how hard he’s had to work, so from that standpoint it transcends sports somewhat,” Golden State coach Steve Kerr said before the game.

Curry had been far from his best beyond the arc to start this road trip, going 3 for 14 in Philadelphia and then 5 for 15 in Indiana. But with his ability to go from slumping to surging in a hurry, Kerr predicted a breakout would be coming soon.

It came quickly Tuesday. Curry hit from straightaway on his first attempt, and fans around the arena stood as he was dribbling the ball across center court on the next possession. He launched an ugly attempt that he missed.

The record-breaker came on his next shot and was vintage Curry. He gave the ball up and eventually raced back to the outside, getting the ball back and seemingly launching it in the same motion before a defender could get out to him.

Not an easy shot, but Curry has made it so many times he knew this one was pure.

It’s that quick shot — whether after catching it or on the dribble — and the ability to release from so far behind the arc that’s made him a shooter unlike any before him.

“He’s the best shooter I’ve ever seen, and I think it’s clear he is the best catch-and-shoot player,” former Dallas superstar Dirk Nowitzki recently said. “But where he’s so good is off the dribble, and I think that’s something that he added, the quick 3 off the dribble. It’s one motion and his shot is gone.”

None of Curry’s stardom was guaranteed when he entered the league in 2009 as the No. 7 pick from Davidson, far from one of the basketball powerhouses that usually produce the top players.

But with perhaps an unmatched combination of dribbling and shooting accuracy, he led a long-distance revolution that has turned the 3-pointer from an afterthought in NBA offenses into a weapon. He has led the league in 3-pointers six times and is well on his way to a seventh for a resurgent Warriors team that again has the league’s best record at 23-5.

“He has revolutionized the way the game is played and continues to leave fans in awe with his amazing artistry and extraordinary shooting ability,” NBA Commissioner Adam Silver said in a statement. “We congratulate him on this historic achievement.”

Curry could put the record well out of reach at his current pace: He entered the night making 5.4 3-pointers per game this season, best of his career.