Hundreds rally in Poolesville to get White’s Ferry reopened

It’s been two years since White’s Ferry connecting Maryland and Virginia was shut down by legal disputes. But many who previously used the ferry for commute or business are not giving up on getting it reopened.
Listen now to WTOP News WTOP.com | Alexa | Google Home | WTOP App | 103.5 FM
(1/4) 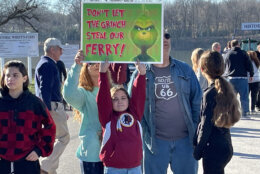 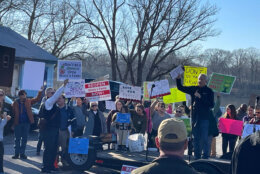 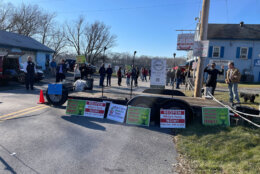 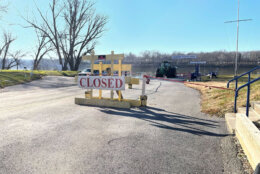 It’s been two years since White’s Ferry, which connects Maryland and Virginia, was shut down due to legal disputes. But many who had used the ferry for commute or business are not giving up on getting it reopened.

Since 1786, White’s Ferry has connected the riverbanks of Poolesville, Maryland, and Leesburg, Virginia. The ferry has been a reliable route for nearly 800 daily users.

Chanting “two years too long,” several hundred people showed up Thursday at the crossing in Poolesville to lend their voice to the cause. Among them was Poolesville Mayor Jim Brown, who said he wants politicians on both sides to make it happen.

”If there was a public road that linked Takoma Park and Kensington that had been blocked off by private people, how long do you think that road would be closed?” Brown said. He believes his town has been forgotten.

White’s Ferry closed at the end of 2020 because of legal battles between ferry operators and the owners of Rockland Farm, who own the property for the ferry landing on the Virginia side.

In 2021, Chuck and Stacy Kuhn, owners of JK Moving Services, bought the ferry operation, but have been unable to come to an agreement with Rockland Farm.

“I’ve talked to different restaurant owners in town, and we estimate that probably 20% of their business is being lost,” Kettler said.

Shruti Bahtnagar, of the Sierra Club, said the ferry’s closure has also had environmental impacts.

“In the two years that the ferry has been closed, nearly 9 million miles of travel has been added,” she said. “And that is a lot of greenhouse gas emissions.”