Montgomery County, Maryland, has been hit with two more acts of antisemitic graffiti.

Graffiti including swastikas was found Monday at Old Georgetown Road and Tuckerman Lane, and the Bethesda Trolley Trail in the Wildwood neighborhood was tagged with antisemitic graffiti that featured appalling messages, according to County Executive Marc Elrich and the Jewish Community Relations Council of Greater Washington.

It’s the second time in three months that such graffiti has been found there: Spray-painted swastikas and white power symbols were found in the same area in August.

Montgomery County officials said they’re working to get rid of the images.

Montgomery County Executive Marc Elrich said in a statement, “I have had to personally deal with antisemitism throughout my entire life, and I have always hoped that there would be a day in my lifetime when it would no longer be a part of our society.”

He added that “antisemitism, hate, and attempts at intimidation in any form should not exist nor be tolerated anywhere.”

“We are one of the most diverse jurisdictions anywhere in the world and now is a time when we need to use it to make us stronger,” he added. “Sadly, from pop culture icons to right wing hate groups, we are witnessing a rise in antisemitism throughout this nation. I never imagined we would be at this place in the 21st century.”

Elrich is encouraging anyone who has information to call police to report hate and bias crimes. 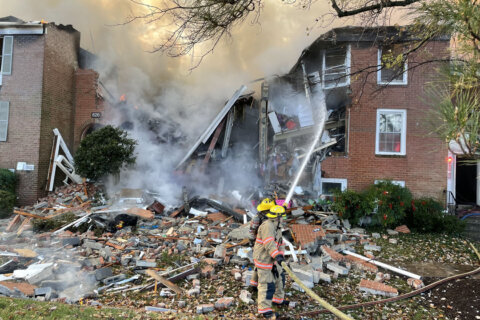