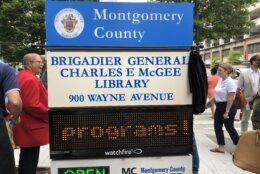 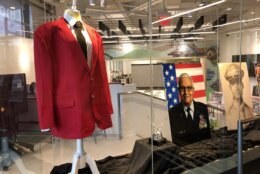 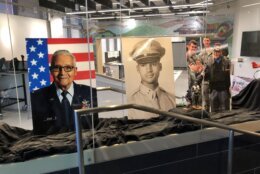 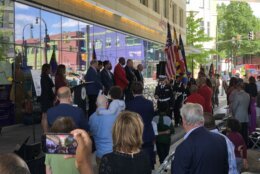 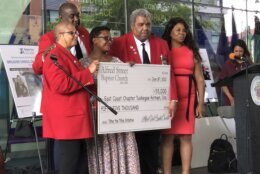 A crowd gathered to honor a local war hero on Saturday as the Silver Spring Library was officially dedicated and renamed for one of the Tuskegee Airmen of World War II.

“This library is going to be a place where people will come and learn about his life, legacy and love for his country,” said Montgomery County Executive Marc Elrich at the dedication ceremony.

McGee was an American fighter pilot and member of the 332nd Fighter Squadron, famously known as the “Tuskegee Airmen,” an all-Black unit in World War II. He later flew combat missions in both the Korean and Vietnam wars.

McGee lived in Montgomery County for more than 30 years, until he died at the age of 102 in January. He was laid to rest at Arlington National Cemetery on Saturday.

His daughter Charlene McGee Smith said the naming ceremony meant the world to his family.

“I can’t think of a more fitting way to acknowledge dad. One of his most important and biggest values was education,” Smith said. “His love for education was persistent throughout his life.”

A special ceremony featured stories, music and speakers who knew McGee, Later, a crowd took pictures and cheered as a curtain was pulled on the Wayne Avenue sign that displayed the library’s new name.

“He fought for freedom. He fought against bigotry. He lifted up those around him,” said Montgomery County Councilmember Will Jawando.

Also in the ceremony, Alfred Street Baptist Church based in Alexandria, Virginia, donated a $55,000 check to the East Coast Chapter of the Tuskegee Airmen to assist with its youth aviation program.

The renaming of the library follows an executive order signed by County Executive Elrich on Feb. 28 to honor the achievements and life of McGee.

Currently, there is an exhibit of artifacts and photos from Brig. Gen. McGee’s life on display in the library lobby.