During the height of the pandemic, Maryland acquired many ventilators to help people with COVID-19. Now, 50 of those portable ventilators are headed overseas and by the end of the week will end up in hospitals in Ukraine.
Listen now to WTOP News WTOP.com | Alexa | Google Home | WTOP App | 103.5 FM
(1/3) 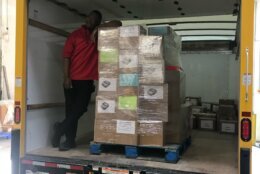 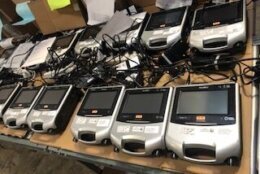 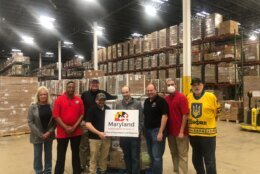 During the height of the pandemic, Maryland acquired many ventilators to help people with COVID-19. Now, 50 of those portable ventilators are headed overseas and by the end of the week will end up in hospitals in Ukraine.

“The state of Maryland continues to stand in solidarity with President [Volodymyr] Zelenskyy and the people of Ukraine,” said Gov. Larry Hogan. “We are proud to make this donation to help save lives and aid the Ukrainians in the fight against Russian aggression.”

The ventilators were donated to the Paul Chester Children’s Hope Foundation, based in Dickerson, Maryland. The group normally goes to developing countries to perform surgeries, but co-founder Dr. Bill Chester said that in speaking with hospitals in Ukraine, he learned the need was not for medical manpower but rather supplies, more specifically the expensive, lifesaving machines.

“We were starting to consider buying them but it basically would have drained most of our resources,” Chester said.

He said he contacted Maryland Del. Nic Kipke, who represents Anne Arundel County, and within an hour, a call to the governor resulted in the donation being given the green light. Three days later, the ventilators were donated to the organization.

Chester said the donation from the state was “made up from heaven” and that the devices are already on their way to the war-torn country. The ventilators are expected to arrive in Poland later this week and will then make their way to hospitals throughout Ukraine.

“Like everyone, I’m horrified to see the tragic destruction and devastation in Ukraine because of the relentless attacks and invasion by Russia,” said Kipke in a news release from the governor’s office.

“We all want to do what we can to help people who are hurting there, which is why when I was approached by my friend Dr. Bill Chester about his efforts to send advanced-level medical supplies to help in Ukraine, I reached out immediately to the governor’s office to help,” Kipke said.

“Contributing medical equipment to help treat wounded Ukrainians in this great time of need is the least we can do,” said Dennis Schrader, secretary of the Maryland Department of Health, on the donation.

Chester said hospitals in Ukraine appear to have enough personal protective equipment, but there is a long list of medical supplies they do need. In addition to ventilators, he said medical teams in Ukraine are asking for ultrasound machines, infusion pumps and blood warmers and all sorts of medications that are not controlled substances. Chester encourages other states to follow Maryland’s lead and donate to the effort.

The foundation was started to honor Chester’s son, Paul Chester, who was killed during a crash in Montgomery County in 2003. Chester, who is an anesthesiologist in Montgomery County, said the group’s focus continues to be on offering surgical help to countries in need and that even though Ukraine doesn’t need the manpower right now, his team will be on standby.

“We’ll go over there in a heartbeat if they want us too,” Chester said.

Chester is also calling on pharmacies that are able to help with medicine donations.

“If I had a clearing house pharmacy or a warehouse full of antibiotics and other drugs, which are used in typical surgical situations or intensive care, that would be a godsend,” Chester said.