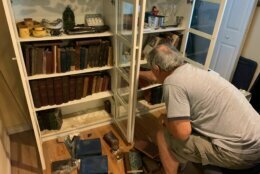 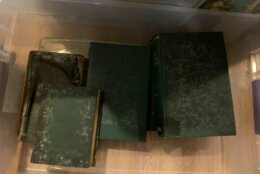 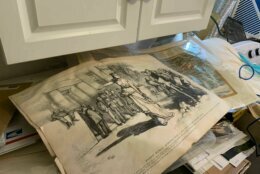 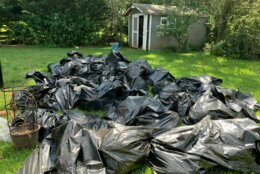 The deadly flash flooding caused by the remnants of Hurricane Ida last week in Rockville, Maryland, destroyed what many families spent their lives building.

When a quick wall of water inundated historian Edwin Grosvenor’s basement, it took with it many priceless books and pieces of art, which he uses to tell America’s story.

“This just breaks my heart,” said Grosvenor, as he moved books — some of which date back hundreds of years — into a box that will go into the trash.

Grosvenor was out of town when the storm sent almost 5 feet of water in only a few minutes into his home’s backyard on Crawford Drive. The wall of water then seeped through his basement door, filling his library and home office with over 2 feet of water.

Grosvenor is the publisher of American Heritage, a 72-year-old magazine dedicated to covering the history of the United States. Much of the work featured in the now-online-only magazine comes from his vast collection of books and documents, some of which Ida has now destroyed.

The waters also destroyed some of the historical art he has collected over the past decades, including a 300-year-old engraving of Henry VIII on which a water line was visible.

He said crowbars had to be used to open the filing cabinets, where he kept his documents, because the water that made its way inside caused the contents of the paper cabinets to expand.

For Grosvenor and his family, the heartache caused by the flood was also compounded by the loss of irreplaceable family keepsakes.

Weeks before the storm, Grosvenor had moved items from his mother’s home and his son’s belongings into the basement. Many of those items now sit in large trash bags in his backyard.

“We’ve been going through our photographs, trying to peel them apart and save them, but we’ve lost really a lot,” Grosvenor said.

Grosvenor’s home is just down the street from Rock Creek Woods Apartments, where a 19-year-old man lost his life when floodwaters entered his apartment. One hundred and fifty others at the complex were left without homes because of the storm waters.

Grosvenor feels that the flooding on his street is a result of inadequate storm-drainage systems in the neighborhood.

Currently, Grosvenor and his wife are working around the clock to figure out what can be saved, but he fears what this will mean for the future of the online magazine.

He said he is thankful for the support he has received from friends, family and readers of the magazine, with some people donating money to help.

“It’s just stuff, you know, I guess, but it’s heartbreaking still,” he said.