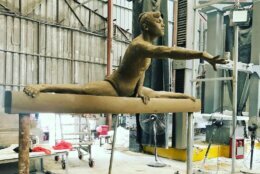 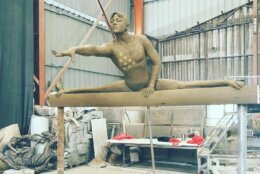 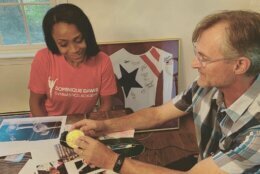 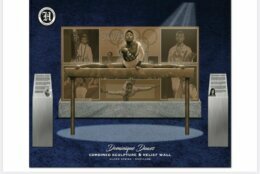 Dawes, a Silver Spring native, is going to be the subject of a sculpture that will be placed in front of the future site of the Silver Spring Recreation and Aquatic Center. The facility will also be the home of the Montgomery County Sports Hall of Fame.

The three-time Olympian, who has made Montgomery County her home and who owns a gym in Clarksburg, said she had questions when she was first contacted about being the subject of a sculpture.

But once contacted by sculptor Brian Hanlon, Dawes said she was happy to work with him. The thing that convinced her, she said was that, “it wasn’t about me. It was truly about inspiring future generations.”

Dawes joined Montgomery County officials in a virtual event Friday to talk with reporters about the project.

When working with Hanlon, a sculptor who’s created more than 500 public monuments, including a sculpture of Harriet Tubman in New York, Dawes sifted through photographs of her Olympic performances. They settled on her famous split on the balance beam, with her arm extended.

“That’s the one that called to me because of the intensity of my face,” she said, adding, “I loved the fact that my arm is actually reaching out because, again, this sculpture is not solely about me. It’s about reaching out and making a lasting impact and leaving a lasting legacy.”

“I want to create a beautiful statue that’s powerful, but of course it has to have that lasting effect of dignity and honor,” Hanlon said,

But Dawes said Hanlon brought up a possible issue with the choice of the pose.

“I know Brian had some concerns about the backside, of my backside,” Dawes said.

So they came up with using a wall behind the sculpture that would incorporate a number of Olympic images.

“I have five kids and three of them are girls, and I just wanted to make sure that the pose had the dignity that none of us have to stand there and say anything or protect anything,” Hanlon said.

As a young Olympian, Dawes has been accustomed to handling massive amounts of pressure. Hanlon spoke about the weight of his task that lay ahead.

“The time that we’re in, in athletics, but specifically with the narrative in gymnastics, this is enormous,” he said. “Yes, I feel it, for sure. And I don’t think I’d be good at what I did if I didn’t feel it. It would be casual, and it is not.”

Dawes said she’s especially pleased that the sculpture will have a home in Silver Spring, where she’s from.

“I would run and spring home all the way up that big hill. I love the fact that it is in my hometown so that young girls and boys can dream big,” Dawes said.