Battle of the bots: High schoolers put their robots to the test in Bethesda

There was quite a crowd at Walt Whitman High School this weekend for a high-energy robotics competition putting the top high school robotics teams head-to-head with a new challenge this year.
Listen now to WTOP News WTOP.com | Alexa | Google Home | WTOP App | 103.5 FM

There was quite a crowd at Walt Whitman High School this weekend for a high-energy robotics competition putting the top high school robotics teams head-to-head with a new challenge this year.

“Hanging is a new thing that we didn’t see last year, last year you had to climb up onto something so each year it’s kind of a different skill set that you have to master,” said Zoe White, 17, a junior at Walt Whitman High School.

This is the fourth year the school has hosted the FIRST Robotics Chesapeake District Regional competition. It runs Saturday and Sunday at the school.

The outline of the challenge is released in January, and teams have to build and program a robot to complete a series of tasks.

This year consisted of shooting playground balls into an elevated goal, then hanging and balancing from a seesaw.

There were 36 local Maryland, DC and Virginia teams that took to the arena for a chance to put their robots to the test.

“We’ve gotten really quick at being able to fix, locate and get rid of the issues that come up during matches,” said Ezra Bird, 16, a junior at Walt Whitman High School.

He said robotics has taught him a lot more than science. 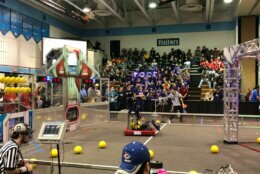 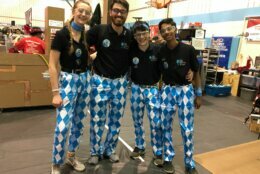 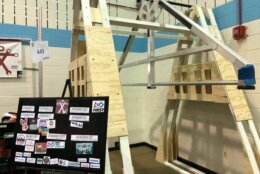 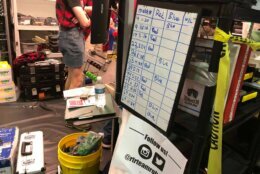 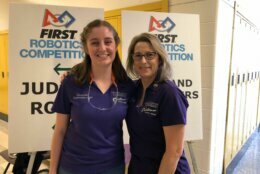 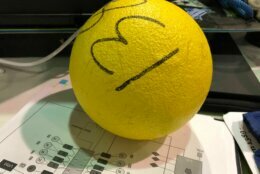 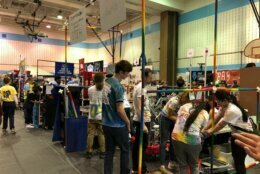 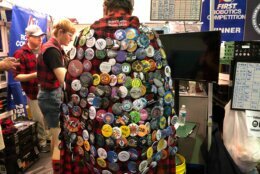 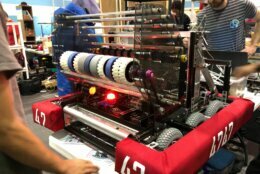 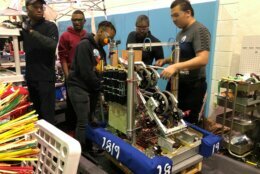 Caroline Gee, an 11th grader at Battlefield High School in Virginia, said she hopes to take the skills she learned to new heights.

“My goal is to become an astronaut,” Caroline said.

She wants to make history. Her goal?

“Definitely a walk on Mars,” she said.

Battlefield’s robotics coach and teacher Gail Drake said the real lesson comes when the students have to modify the robot’s programming after each round of the competition.

“They’ll watch how the robot’s performing in the game and then they’ll go back and do the analysis on what tweaks they want to make to their design,” Drake said. “So that becomes an extra challenge on the engineering side.”

Farish Perlman, team president for Whitman Robotics, said it’s fun to see all the teams working together for a common goal.

“My hope for today is that teams just really compete at their best level, their highest level and have the best time today that they can have,” Perlman said.