A large group assembled for reflection and gathered scoops of soil to commemorate the death of a 22-year-old African-American man from Montgomery County, who was lynched in 1880.
Listen now to WTOP News WTOP.com | Alexa | Google Home | WTOP App | 103.5 FM

A large group assembled for reflection and gathered scoops of soil to commemorate the death of a 22-year-old African-American man from Montgomery County, Maryland, who was lynched in 1880.

George Peck was accused of assaulting a white child, but was never tried or convicted in the case. Peck’s death at the hands of a mob, is one of 41 documented lynchings in Maryland.

At least three of those took place in Montgomery County.

Nearly 140 years later, a large group lined up in front of six jars placed in a grassy field across from Poolesville Presbyterian Church. As the Encore Singers of Olney sang, each person took a turn scooping a handful of dirt, emptying or sprinkling it into the jars.

“It’s really heartening to see literally the whole community here — diverse, different ages, different races come here to stand on the ground where George Peck was murdered and … in a way, give him his own funeral that he never had,” Montgomery County Councilmember At-Large Will Jawando told WTOP.

“We can’t grow, and learn and correct from the past unless we recognize it in all of its brutality,” said Jawando.

During the ceremony, Montgomery County Council member At-Large, Hans Riemer read a proclamation, stating Sunday’s soil collection will be displayed in the Legacy Museum of the Equal Justice Initiative as part of an approved community remembrance project designed to help Montgomery County residents understand the ongoing impact of enslavement and racism. 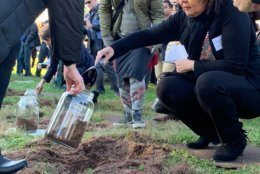 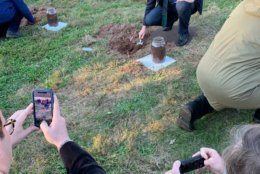 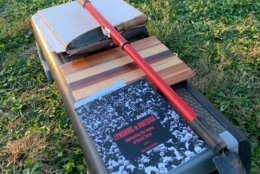 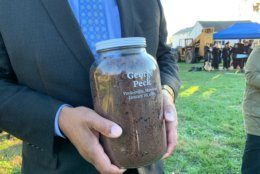 After the ceremony, Riemer told WTOP the ceremony was important to “remember a victim of terrorism, a member of our community, and try to bring that forward and hold it close, keeping the story as present as the effects of the story are in the world around us.”

Djenebou Traore, a Student at John F. Kennedy High School in Silver Spring, was recruited by her African-American History teacher to present some original poetry.

“We created poems through our class after we did a study on lynchings in general, and lynchings in Montgomery County,” Traore said.

“It is important for us to engage in this process of restorative truth telling that can lead to repair,” said Elliot Spillers a fellow with the Equal Justice Initiative in Montgomery, Alabama. “Our society is burdened by this history. We as an organization believe that slavery did not end in 1865, but rather has evolved into a continuing legacy that continues to burden African American people, which has directly informed our contemporary crisis of mass incarceration today,” Spillers told WTOP.

“The importance of this moment is that this is a commitment that the people of Poolesville have made to ensure that this history will not repeat itself,” Spillers said.

In addition to a jar of soil going to the Equal Justice Initiative in Montgomery, Alabama, other jars are headed to the Montgomery County Historical Society, Historic Medley District in Poolesville and The Menare Foundation.

One jar will also go into a time capsule at Josiah Henson Park in North Bethesda, Anthony Cohen of the Montgomery County Lynching Memorial Project told the group after the collection.

But Sunday’s event isn’t meant to be the end of the road.

“We look at this soil collection as, really, the start of a community conversation,” Cohen said.