It’s expected that every public school bus in Montgomery County, Maryland, will be equipped with a camera system by the time the school year begins in September.

During a briefing on Monday, county council members heard words, such as “shocking,” “staggering” and “horrifying,” used to describe the routine nature of violations.

Last school year, images of 54,000 cars were captured driving past buses that had extended stop signs and red lights flashing. When videos were shown of “routine” near misses, council members audibly gasped when one showed a child being hit by a car.

“She survived because when she landed, she landed on her back and her backpack. It stopped her head from hitting the ground; otherwise she would not have been here,” said Capt. Tom Didone of Montgomery County police’s traffic division.

Council members and speakers agreed that education campaigns and public service announcements showing near misses might help lower the number of violations.

Some residents have complained about how the camera program has been deployed. People on neighborhood listservs describe seeing buses sitting for long periods of time with yellow lights flashing before they said the red stop sign was activated suddenly, giving drivers little time to stop.

Discussion of similar complaints at the hearing led to suggestions that school bus drivers need to be briefed more routinely on best practices as an integral part of the program to ensure its success.

Didone said the three most common reasons people ignore the bus stop signs are: drivers are selfish and rush, they are distracted and don’t notice, or they are not sure about the law.

Find out more about school bus safety in Montgomery County on its website.

“It’s better to err on the side of caution,” Council Member At-Large Craig Rice said, adding that if you’re not sure, just stop.

Didone told lawmakers that an analysis of ticket locations and situations would be conducted upon the conclusion of next school year, when a full year of data is available. Then, insight into why the violations are occurring can potentially be used to suggest solutions that might include engineering adjustments to bus stop locations and signage.

The county’s 5-year contract with the bus camera vendor expires in about two years and negotiations will soon get underway to determine how revenue will be split once initial startup costs are covered.

“It’s not about the money being a revenue generator, it is about the public safety of all of our students,” Todd Watkins, Montgomery County Public Schools transportation director said. “There might be a cost that we have to pay for all of these systems to make sure our roads are safe for our school students.”

“Unfortunately, we’ve had some very high-profile criminal acts with students as victims … and this captured those acts and are going to put people in prison,” Anderson said. 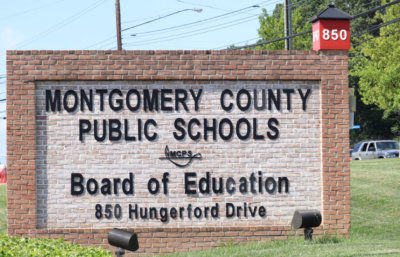