In new court filings, prosecutors said charges related to a pair of silencers Christopher Hasson possessed “serve one purpose: to murder quietly. The defendant intended to do so on a mass scale, and his detention has thwarted his unlawful desire.”
Listen now to WTOP News WTOP.com | Alexa | Google Home | WTOP App | 103.5 FM

Prosecutors are providing more details about their case against a Coast Guard officer from Maryland accused of plotting a terror attack against prominent Democrats.

New filings submitted by federal prosecutors ahead of another detention hearing for 49-year-old Coast Guard Lt. Christopher Hasson, of Silver Spring, say the drugs and weapons charges filed against him go right to the heart of a larger plot they say Hasson was involved in at the time of his arrest.

In February, a judge ordered Hasson be held in jail, but seemed willing to entertain defense arguments that the charges leveled against him so far weren’t sufficient to hold him behind bars.

He has not been charged with any terrorism-related crimes.

But in new filings Tuesday, prosecutors said the charges related to a pair of silencers Hasson possessed “serve one purpose: to murder quietly. The defendant intended to do so on a mass scale, and his detention has thwarted his unlawful desire.”

In addition to the long list of politicians and celebrities they say Hasson was interested in attacking, prosecutors now say they can add two unnamed Supreme Court justices to those Hasson wished to kill, along with two executives from social media companies. Prosecutors claim Hasson searched for their home addresses while he was also searching firearm sales websites.

Prosecutors also argue that Hasson’s views on race inform his criminal conduct, noting he wanted a race war and searched for “best n***** killing gun” directly before visiting websites where firearms are sold. They also note that Hasson has admitted to using drugs multiple times since he was taken into custody, including three days in a row back in March. Prosecutors say it was Tramadol, an opioid, that Hasson was addicted to at the time of his arrest.

The new filing concludes with noting that Hasson is a known admirer of Anders Breivik, a far right domestic terrorist from Norway. The government said it should be noted that the terrorists who attacked a pair of mosques in New Zealand last month also claim to have been inspired by Breivik. Prosecutors say Hasson poses a substantial risk of danger to the community and requests by his public defenders to reconsider his detention should be denied.

A judge in federal court in Greenbelt will decide Thursday afternoon whether Hasson should stay in jail pending trail. 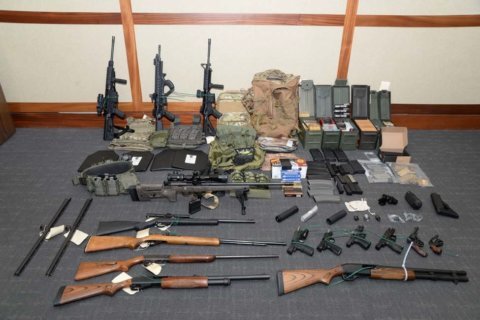