The 80-minute lockdown on the afternoon of Nov. 27 started when an active shooter alert that never should have been sent went out across the campus of Walter Reed. From there, someone misheard it.
Listen now to WTOP News WTOP.com | Alexa | Google Home | WTOP App | 103.5 FM

WASHINGTON — An active shooter alert that never should have been sent out was then misunderstood by someone who reported it to security. That’s the latest to come out of the ongoing investigation into what led to a lockdown and mass confusion on the campus of Walter Reed National Military Medical Center last month.

The 80-minute lockdown on the afternoon of Nov. 27 started when an active shooter alert went out to select staff of Walter Reed,  said Jeremy Brooks with Naval Support Activity Bethesda. It never should have been sent, he said, and was intended for and sent to the staff of another tenant on the campus.

The NSA runs security for the Bethesda, Maryland, installation which houses Walter Reed.

The alert included the words “drill” and “exercise,” but Brooks said the person who got the voicemail on Walter Reed’s emergency line did not hear those critical words.

“It may have been cut off by the time they picked up the phone and heard what they heard,” Brooks said.

Once the alert made its way through the official channels to dispatch and finally to security, a full response was deployed, and Montgomery County police officers were called in to assist in searching for a shooter who never existed.

Brooks confirmed it took an hour to determine there was no threat and the alert was sent by mistake.

“At some point within the following hour, we were finally able to hear from [the person] this started with. An unintended alert was sent out, even though it did say ‘drill’ or ‘exercise,’ and we were able to confirm it shortly before we gave the all clear,” he said.

In the midst of the response, the Navy tweeted from its official account that the incident was a drill, and the Pentagon retweeted that official statement. At the time, the NSAB maintained that the incident was not a drill, and the disparity caused confusion. Brooks said it is still unclear where the Navy learned the information they used for their tweet.

“They tweeted out what their understanding of the situation was. That’s part of the investigation as well.”

Editor’s Note: This article previously left out the word ‘Bethesda’ in identifying Naval Support Activity Bethesda. It also referred to an exercise that did not require an alert. There was no exercise taking place that prompted the errant alert. 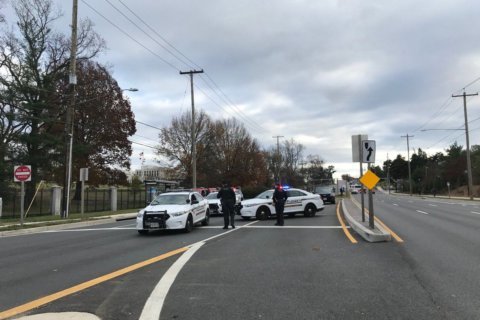