Maryland Gov. Larry Hogan said he and Montgomery County Executive Ike Leggett are in "lockstep" in their efforts to land Amazon's second headquarters but they're not revealing many details as they try to close the deal.

GAITHERSBURG, Md. — Maryland Gov. Larry Hogan said he and Montgomery County Executive Ike Leggett have made a great team in their efforts to get Amazon to choose Montgomery County over D.C. or Virginia for its second headquarters — but he didn’t give up any details when asked about those efforts by reporters.

“We don’t want to talk about any discussions we may be having. I think we’d rather keep those between us and the people we’re trying to close the deal with,” Hogan said of the efforts to snag Amazon’s “HQ2.”

Leggett said he agreed, and added, “We’re just doing this in a professional, straightforward way.”

Hogan complimented Leggett’s handling of the efforts, saying he and the county executive are in “lockstep” in their efforts to land Amazon, and it’s potential for 50,000 new jobs.

“The county and the state are putting our best foot forward, I’ll tell you that. We were both saying, we’re leaving it all on the field,” Hogan said, referring to the incentives that are being offered to Amazon.

Hogan’s $5 billion dollar incentive package with its tax breaks for Amazon was the subject of a recent hearing in Annapolis, and some lawmakers questioned the cost of the offer. Hogan has repeatedly dismissed those concerns, pointing out that there are a number of contingencies on the deal.

Just before the hearing, the state released a study by the Sage Policy Group showing Maryland could see an annual boost to state wages of nearly $8 billion. The same report shows a potential for an added $17 billion in economic activity in Maryland. 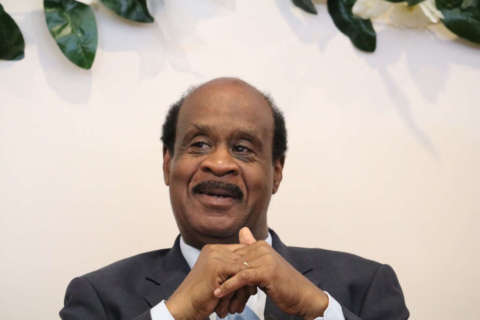