Maryland State Police looking for vehicle that caused I-270 crash 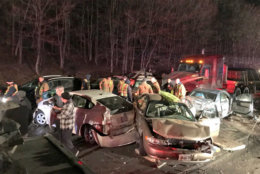 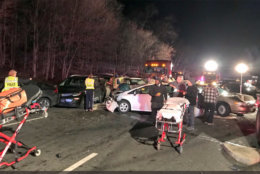 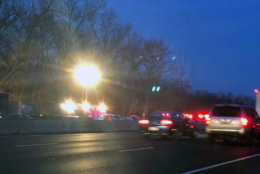 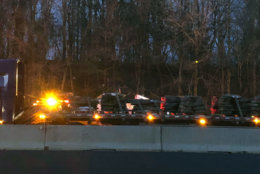 WASHINGTON — Maryland State Police in Rockville say an unidentified white tractor-trailer made an unsafe lane change that triggered Monday morning’s crash on southbound Interstate 270 in Germantown, shutting it down and snarling the morning commute for hours.

The accident, which involved 18 vehicles, occurred shortly after 5 a.m. Witnesses told authorities that the truck moved into the far-right lane of the four-lane highway, causing another vehicle to slam on its brakes, causing a chain reaction.

One of three tractor-trailers caught in the chain reaction was a flat bed carrying slate slabs, said state police spokesperson Elena Russo. The crash, she said, threw slabs “all over the road.”

“It really is somewhat of a godsend that more people weren’t hurt in what looked to be a horrific incident,” Russo added.

That truck did not remain at the scene, and police are hoping witnesses may be able help identify it.

“There’s not a whole lot we’re going to be able to do based on the description,” state police Sgt. Adam Matthai said. “How many white tractor-trailers are there? So unless someone were to come forward with more information, there’s not a very good shot we could identify the vehicle.”

The crash happened in Germantown, between Middlebrook Road and Maryland 124/Montgomery Village Avenue. The highway was completely closed for almost two hours.

One of the trucks involved was carrying gravel and slate and lost its load. Heavy equipment was called out to move the slate slabs off the roadway.

Prior reports that said the gravel truck turned over were not accurate, Matthai said.

Fifteen passenger cars, trucks and SUVs were also caught in the accident. Some vehicles had to be towed off the highway, while others with minor damage were able to move on their own. None of the vehicles caught in the crash was cited by police.

WTOP’s Melissa Howell provided this video from the scene:
Four people were transported to local hospitals for treatment.

State police said the accident happened at 5:20 a.m., just as the Monday commute was starting.

Traffic was backed up for miles toward Frederick County.

Some traffic began getting through in the two left lanes during the 7 a.m. hour, and it was finally fully reopened an hour later, though authorities did close the right lane for crash reconstruction around 12:30 p.m.

“It’s a major event when you have all four lanes of 270 shut down for an extended period of time,” said Matthai, who reminded drivers to maintain a safe following distance in case vehicles have to stop without warning.

The Maryland State Highway Administration advised drivers to seek alternate routes, which slowed down traffic throughout Montgomery County on secondary roads such as Maryland 355/Rockville Pike and Maryland 28/Norbeck Road. Drivers used Maryland 124/Montgomery Village Avenue to rejoin the highway to the south of the accident scene.

Not sure I’ve ever seen a chain reaction crash this large. I-270 South at Middlebrook Road @nbcwashington pic.twitter.com/yUbvUqaV5s

Below is a map of where the accident happened:

Swift vaccine rollout for children 5-11 in Montgomery Co. a ‘game-changer’ for less disruption to schools