A Silver Spring man was arrested and charged with multiple traffic offenses, including driving under the influence of alcohol, after rear-ending a police cruiser responding to a crash.
Listen now to WTOP News WTOP.com | Alexa | Google Home | WTOP App | 103.5 FM
(1/4) 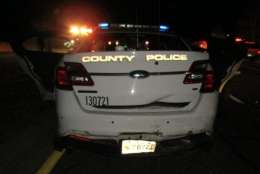 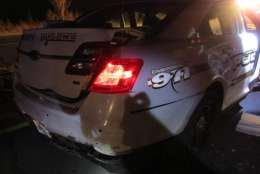 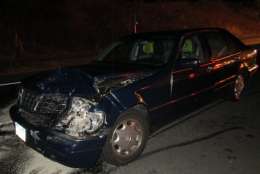 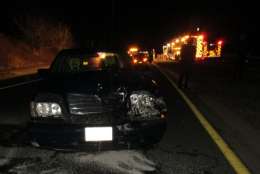 WASHINGTON — A Silver Spring, Maryland, man was arrested and charged Saturday with multiple traffic offenses, including driving under the influence of alcohol, after a marked Montgomery County police cruiser stopped at crash scene was struck from behind.

Montgomery County police said Officer Matthew Runkles arrived first at the scene of a collision on Norbeck Road in Colesville, Maryland, around 6:30 p.m.

Runkles, a 10-year veteran of the police force, stopped behind one of the disabled vehicles in the roadway and was about to exit his patrol car when Morris Moody, 65, of Deer Valley Terrace, rear-ended him, officials said.

Moody then swerved his 1995 Mercedes-Benzs500 around the cruiser and came to a stop, police said.

Runkles, who had unbuckled his seat belt in order to exit the vehicle, suffered nonlife threatening injuries. He was taken to a hospital, but has been released.

Police said Moody agreed to a breath test and showed a Blood Alcohol Content of 0.17, more than double the legal limit of 0.08 in Maryland.

Moody has been charged with driving a vehicle under the influence of alcohol and additional traffic offenses.