MINNEAPOLIS (AP) — Byron Buxton hit his second homer of the game, a 469-foot, three-run drive that overcame a 10th-inning deficit and lifted the Minnesota Twins over Chicago 6-4 on Sunday and sent the White Sox to their seventh straight loss.

Buxton hit a two-run, opposite-field homer to right in the seventh against Aaron Bummer that tied the score 3-3.

After Yasmani Grandal’s RBI single in the 10th off Joe Smith (1-0), Liam Hendriks (0-2) walked José Godoy with one out in the bottom half after automatic runner Nick Gordon began the inning on second.

Hendriks fell behind 3-1 in the count, and Buxton drove a fastball into the leftfield second deck for the longest game-ending home run since MLB Statcast started tracking in 2015. It was Buxton’s third walk-off hit, his first since Sept. 5, 2020.

Buxton did not see the ball land.

“I was watching the dugout,” he said. “That’s how hyped I was. Once I hit it, I knew I had it. The excitement to enjoy it with your teammates took over.”

“I think he’s absolutely the best player in the world when he’s out there running around doing his thing,” Twins manager Rocco Baldelli said. “You’re talking about a guy that’s just demolishing the baseball every day and is absolutely one of the top handful of defenders in the world, as well.”

Tim Anderson and Danny Mendick homered for Chicago, which led 3-1 in the seventh. The White Sox are on their longest losing streak since Aug. 27 to Sept. 2, 2019, and have scored just 15 runs in the seven defeats.

“Just got to keep grinding it out. Nothing’s really going our way and nobody’s going to really give us anything,” Anderson said. “It’s still early.”

Chicago had not homered in its previous six games, but Anderson hit Chris Archer’s first pitch of the game into the bullpen for his 14th career leadoff home run.

Andrew Vaughn added a two-out, RBI single with the bases loaded in the third for a 2-0 lead.

Activated from the injured list, White Sox starter Lucas Giolito struck out nine in four innings, including Buxton three times. The right-hander, who pitched four scoreless innings on opening day before straining his left abdomen, threw 48 of 76 pitches for strikes.

With two runners in scoring position, Giolito struck out Trevor Larnach and Gordon, both for the second time, to end the third inning. Larnach struck out with the bases loaded to end the first.

Chicago placed OF Eloy Jiménez on the 10-day IL with a right hamstring strain, an injury that is expected to cause him to miss six to eight weeks Jiménez was injured Saturday trying to beat out a ground ball.

“I think the big thing is tomorrow when he goes to Chicago and really gets an extensive exam,” manager Tony La Russa said. “We’ll hope for the early indications.”

A ruptured left pectoral tendon limited the oft-injured Jiménez to 55 games last season. He is hitting .222 through 11 games this season with one home run and seven RBIs.

Twins: C Ryan Jeffers was a late scratch with a left knee contusion. Recalled Saturday from Triple-A St. Paul, Godoy got his first start. … OF Alex Kirilloff (wrist) is expected to begin a rehab assignment with St. Paul, serving as designated hitter Tuesday and play nine innings in the field Wednesday. 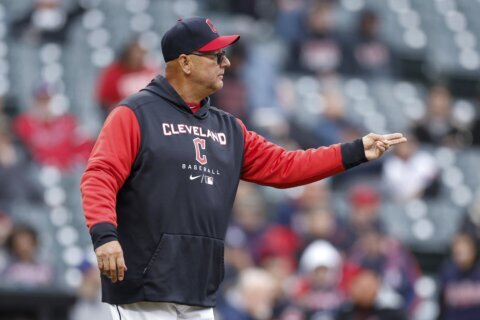 Houston RHP Odorizzi stretchered off in Boston, to get MRI