LOS ANGELES (AP) — Dave Roberts rushed into his office after the Dodgers’ victory and turned on the TV. He caught a familiar sight — the rival Giants winning again.

“I was doing a little scouting,” the manager said.

Mookie Betts and Corey Seager homered back-to-back in the first inning, Justin Turner and AJ Pollock did the same in the fourth, and Los Angeles completed a three-game sweep of the San Diego Padres with an 8-3 victory Thursday night.

The defending World Series champions remained two games behind NL West-leading San Francisco, which beat Arizona 5-4 with a walk-off hit in the ninth inning. Los Angeles is chasing its ninth consecutive division title and time is running out.

“This is two teams playing really good baseball in a pennant race,” Roberts said. “We just got to play good baseball. If we do that, bring it on. It doesn’t matter who we play or what format.”

The Dodgers won their 12th in a row at home, where they close out the regular season with three games against NL Central-champion Milwaukee while the Giants host San Diego. The Dodgers need to sweep the Brewers and have the Padres sweep the Giants to claim the division.

“I’m not worried about them and what they’re doing,” third baseman Justin Turner said. “We have to control what’s in front of us. We did a great job tonight.”

With 103 wins and three games left, the Dodgers could finish with the most victories of a team that failed to finish first, topping the 104 by the 1942 Brooklyn Dodgers, who were two games behind St. Louis, and the 1909 Chicago Cubs, who finished six wins behind Pittsburgh.

Seager continued his streak of hot hitting. He went 3 for 4 with two runs scored and has five homers in his last four games.

“He knows what he wants to do and he knows his swing as good as anyone,” Turner said. “Right now, it looks pretty familiar. Looks very similar to that bubble Corey Seager we saw last year in the postseason.”

The sellout crowd of 52,550 was still settling in when Betts launched his 23rd homer to left-center and Seager followed with his 15th to the lower right-field seats off Vince Velasquez (3-9).

The Dodgers extended the lead to 4-1 on Turner’s 26th homer and Pollock’s 20th in the fourth.

The Dodgers have 11 homers in their last two games. Betts homered to start a comeback in the seventh on Wednesday night, and Max Muncy, Pollock, Cody Bellinger and Seager slugged homers in the eighth to eventually win 11-9.

Seager added a solo shot in the seventh.

Fernando Tatis Jr. blasted a two-run, 467-foot shot — his NL-leading 42nd — that cleared the left-field pavilion in the fifth, drawing the Padres to 4-3. At 116.6 mph, it was the hardest hit ball of his career. Tatis snapped an 0-for-14 skid dating to last Friday.

Ha-Seong Kim homered for the Padres in the second.

The Dodgers tacked on three runs in the sixth for a 7-3 lead. Will Smith and Bellinger had RBI singles and Pollock had a sacrifice fly.

Velasquez gave up four runs and six hits in 4 2/3 innings. He struck out seven and walked one.

The Padres lost their last nine games against the Dodgers and finished the season series with a 7-12 mark.

SCENE OF THE HIT

The State Farm ad in center field bore the white tape outline of Gavin Lux’s body. He crashed into the wall head-on and tumbled over chasing Wil Myers’ triple on Wednesday. The Dodgers utility player was still sore a day later.

“It was fun to see that,” Roberts said of the gag. “Gavin enjoyed it, too. Guys giving him a little bit of ribbing.”

Dodgers starter Tony Gonsolin allowed three runs and four hits in 4 2/3 innings. The right-hander struck out five and walked two. The noted feline fan wore cleats with different colored faux fur on the tops of each one and a picture of a cat on the side. He helped with the design, which paid homage to one of his cats.

“It was a lot of fun wearing those,” he said.

Umpire Brian Gorman worked his last game before retiring Thursday night. The 62-year-old umpired in three World Series, two All-Star Games and numerous division and league championship series during his 30-year career in which he called games in both the National and American leagues. His father, Tom, was an NL umpire from 1951-77. Gorman was recognized by the public address announcer before the game.

Padres: They hadn’t named a starter for Friday’s opener at San Francisco. 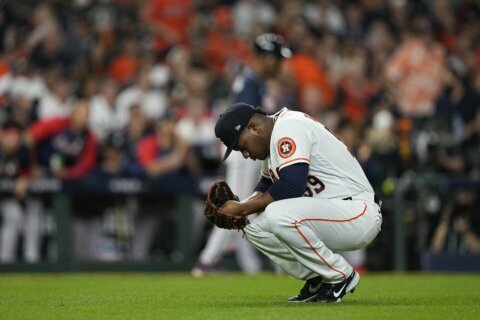