Kelenic also walked and scored twice as the Mariners remained four games behind Toronto for the second AL wild-card spot.

“As a team, we swung the bat really well,” Kelenic said. “It wasn’t just me. (Starting pitcher and fellow rookie) Logan (Gilbert) had a heck of a day today. Overall, it’s what we needed to bounce into Oakland.”

Kelenic, who entered the season as one of the top minor league prospects in baseball, went 5 for 9 with three home runs, two doubles, three walks and seven RBIs in the three-game series.

“A nice job all the way around,” Seattle manager Scott Servais said. “The key to the game was early in the game. It’s a hot day here. Your starting pitcher comes out and takes control and sets the tempo.

“The offense was on top of it. It’s not just the first inning. We kept constant pressure on them. We needed to win this series. We won this series. We’ll head to Oakland and see what happens there.”

Gilbert (6-5) cruised through seven innings, allowing one run on three hits. He walked one and struck out five while snapping his three-game losing streak.

“I felt pretty good,” Gilbert said. “I felt like I could work everything in there. It was really hot. I was trying to just force contact and get right after them. With our defense, things usually go well if they put the ball in play if it’s not hard contact.”

The Royals were ensured their fifth straight losing season. They won the 2015 World Series, went 81-81 the next year and haven’t finished above .500 since the

Royals star Salvador Perez, who came into the game tied with Jose Abreu with 113 RBIs and second in home runs with 45, was 0 for 4 with two strikeouts.

“He just had trouble getting into any rhythm,” manager Mike Matheny said. “We’re normally talking about fastball command, but at lot of times he has the safety net with the changeup. He had trouble finding it in the zone too. He didn’t have a strike pitch to go to.”

The Mariners jumped on Kowar early, though as was the case this whole series, they left runs on the table.

Ty France started it with a one-out double and back-to-back walks to Abraham Toro and Mitch Haniger loaded the bases. Kelenic lined a two-run double off the wall in right center, but Kowar worked around further trouble.

The Mariners added another run on an RBI single by France.

The Mariners got another run in the fifth on a single by Dylan Moore that drove in Kelenic. Haniger homered in the ninth.

Whit Merrifield doubled in the Kansas City sixth and scored on a single by Nicky Lopez.

The Mariners play at Oakland on Monday night. LHP Tyler Anderson (1-1, 3.67 ERA) will get the start for Seattle.

The Royals head to Cleveland for a doubleheader against the Indians. RHP Brady Singer (4-10, 4.85 ERA) will start the first game against RHP Triston McKenzie (5-6, 4.28 ERA). Neither club has announced a starter for the nightcap.

Braves get Soler back for NLCS after positive COVID-19 test 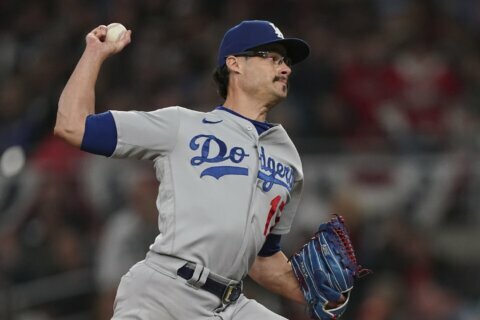 Facing elimination, Dodgers turn to Kelly in Game 5 of NLCS