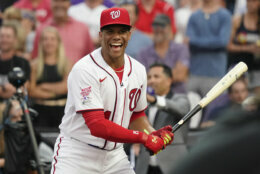 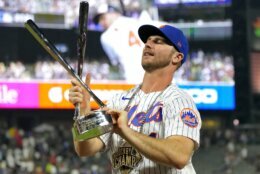 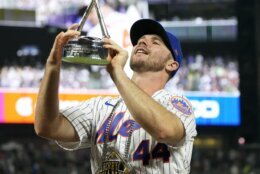 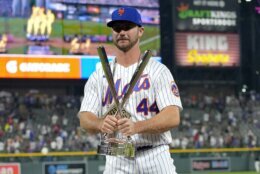 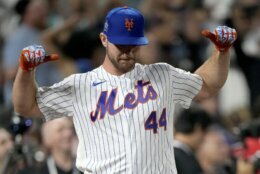 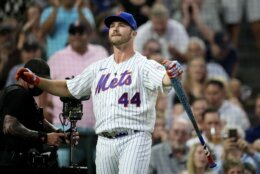 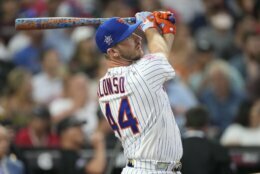 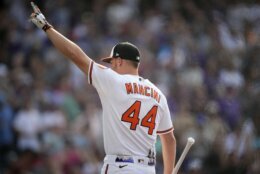 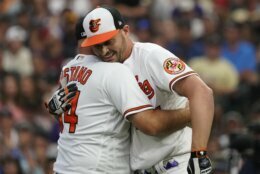 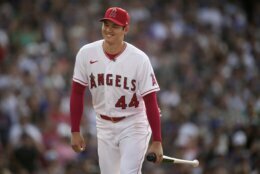 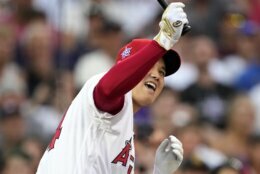 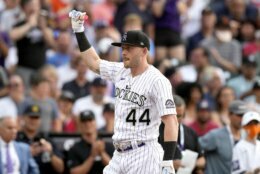 DENVER (AP) — Pete Alonso’s words were as bold as his home runs.

“I’m the best power hitter on the planet,” the New York Mets first baseman proclaimed after winning his second straight Home Run Derby. “Being able to showcase that and put on a fun display on for the fans is truly a dream come true for me.”

Alonso danced to the title, besting Shohei Ohtani, Trey Mancini and Juan Soto on a night of record long balls in the thin Rocky Mountain air of Coors Field.

Alonso earned $1 million — more than his $676,775 salary. He’s made $2 million in Home Run Derby winnings compared to about $1.47 million in career salary from the Mets through the end of this season.

“My parents let me stay up past my bedtime to watch this,” the 26-year-old recalled. “That was one of the few nights of the year I got to stay up past of my bedtime and watch. Watch incredible feats you don’t see in a regular baseball game. To be able to do back to back is really special to me.”

He has a chance to match Griffey, who also won in 1994, as the only three-time champion.

Batting second, Alonso trailed 22-17 after the first two minutes of the final round, then hit six homers on six swings over the first 28 seconds of his final minute.

Mancini, who returned this season from cancer treatment, was the sentimental favorite, while Alonso was the most animated of the eight sluggers as the longball competition returned after a one-year absence caused by the coronavirus pandemic.

With custom bats in the Mets’ royal blue and orange, and matching shoes and batting gloves, Alonso was a human bobblehead, nodding on beat in the batter’s box as he stepped out and danced. He motioned with his arms to whip up fans during a timeout.

“It was incredible, especially after the last year-and-a-half,” Mancini said.

Mancini knocked out Colorado’s Trevor Story 13-12 in the second round, hitting second and advancing with a drive to center. Mancini knew topping Alonso would be difficult.

“He’s hitting balls over 500 feet with ease. It didn’t seem like he got too tired and I got pretty gassed in that last bonus round,” Mancini said. “He’s a beast out there.”

Soto thrilled the crowd of 49,048 with a 520-foot homer, the longest derby drive in the Statcast era, topping 513 feet the New York Yankees’ Aaron Judge in 2017 at Miami. Before Statcast, the Chicago Cubs’ Sammy Sosa was said to have hit one 524 feet at Milwaukee in 2002, clearing Bernie Brewer’s slide.

Mark McGwire had the longest ball in the 1998 Derby at mile-high Coors, a 510-footer.

Ohtani, the Los Angeles Angels sensation set to start on the mound and hit leadoff as designated hitter for the American League in Tuesday night’s All-Star Game, started slowly but forced two rounds of tiebreakers with Soto before losing 31-28 in the second round.

They were tied 22-all after regulation and 28 apiece following the first tiebreaker. Soto homered on all three swings of the next tiebreak, and Ohtani grounded out on his first swing.

“It was fun, but it was exhausting,” Ohtani said through a translator. “The last 30 seconds of both the first round and the tiebreaking round were really exhausting.”

Mancini won the first round 24-23 over Oakland’s Matt Olson, who hit a deep foul on his final swing.

“He’s a good dude,” Olson said. “To be able to battle the way he battled and come back and perform the way he has this year says a lot about him, his grit and his toughness.”

Story defeated Texas’ Joey Gallo 20-19 when Gallo popped out on his last swing.

“It is tiring, for sure, but it was a lot of fun for the first time,” Gallo said.

Gray expected to start for the Rockies against Dodgers

Wood expected to start for the Giants against the Pirates

Padres to face Marlins on the road