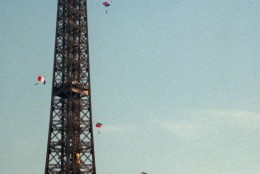 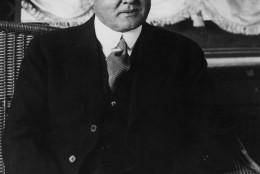 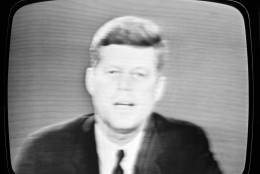 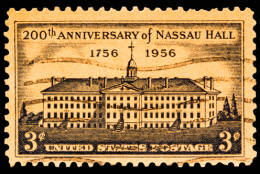 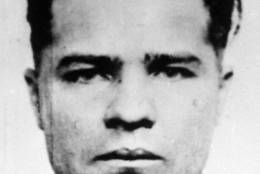 On Oct. 22, 1962, in a nationally broadcast address, President John F. Kennedy revealed the presence of Soviet-built missile bases under construction in Cuba and announced a quarantine of all offensive military equipment being shipped to the Communist island nation.

In 1797, French balloonist Andre-Jacques Garnerin (gahr-nayr-AN’) made the first parachute descent, landing safely from a height of about 3,000 feet over Paris.

In 1811, composer and piano virtuoso Franz Liszt was born in the Hungarian town of Raiding (RY’-ding) in present-day Austria.

In 1934, bank robber Charles “Pretty Boy” Floyd was shot to death by federal agents and local police at a farm near East Liverpool, Ohio.

In 1979, the U.S. government allowed the deposed Shah of Iran to travel to New York for medical treatment _ a decision that precipitated the Iran hostage crisis.

In 1981, the Professional Air Traffic Controllers Organization was decertified by the federal government for its strike the previous August.

In 1991, the European Community and the European Free Trade Association concluded a landmark accord to create a free trade zone of 19 nations by 1993.

In 1995, the largest gathering of world leaders in history marked the 50th anniversary of the United Nations.

In 1998, the government advised parents to remove the batteries from their kids’ “Power Wheels” cars and trucks, made by Fisher-Price, because of faulty wiring that could cause them to erupt into flame.

In 2002, bus driver Conrad Johnson was shot to death in Aspen Hill, Md., in the final attack carried out by the “Beltway Snipers.”

In 2004, in a wrenching videotaped statement, aid worker Margaret Hassan, kidnapped in Baghdad, begged the British government to help save her by withdrawing its troops from Iraq, saying these “might be my last hours.” (Hassan was apparently killed by her captors a month later.)

Five years ago: A gunman shot and killed a soldier standing guard at a war memorial in Ottawa, then stormed the Canadian Parliament before he was shot and killed by the usually ceremonial sergeant-at-arms.

One year ago: President Donald Trump declared that the U.S. would start cutting aid to three Central American countries he accused of failing to stop thousands of migrants heading for the U.S. border. A bomb was found in a mailbox at the suburban New York home of liberal billionaire philanthropist George Soros; federal agents safely detonated the device after being summoned by a security officer.