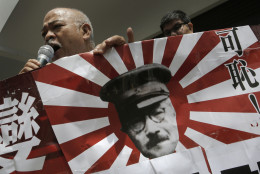 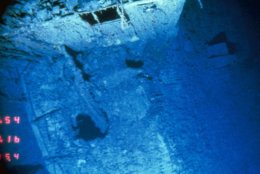 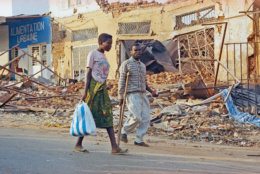 On July 18, 1969, Sen. Edward M. Kennedy, D-Mass., left a party on Chappaquiddick (chap-uh-KWIH’-dihk) Island near Martha’s Vineyard with Mary Jo Kopechne (koh-PEHK’-nee), 28; some time later, Kennedy’s car went off a bridge into the water. Kennedy was able to escape, but Kopechne drowned.

In A.D. 64, the Great Fire of Rome began, consuming most of the city for about a week. (Some blamed the fire on Emperor Nero, who in turn blamed Christians.)

In 1863, during the Civil War, Union troops spearheaded by the 54th Massachusetts Volunteer Infantry, made up of black soldiers, charged Confederate-held Fort Wagner on Morris Island, S.C. The Confederates were able to repel the Northerners, who suffered heavy losses; the 54th’s commander, Col. Robert Gould Shaw, was among those who were killed.

In 1918, South African anti-apartheid leader and president Nelson Mandela was born in the village of Mvezo.

In 1940, the Democratic National Convention at Chicago Stadium nominated President Franklin D. Roosevelt (who was monitoring the proceedings at the White House) for an unprecedented third term in office; earlier in the day, Eleanor Roosevelt spoke to the convention, becoming the first presidential spouse to address such a gathering.

In 1944, Hideki Tojo was removed as Japanese premier and war minister because of setbacks suffered by his country in World War II. American forces in France captured the Normandy town of St. Lo.

In 1947, President Harry S. Truman signed a Presidential Succession Act which placed the speaker of the House and the Senate president pro tempore next in the line of succession after the vice president.

In 1986, the world got its first look at the wreckage of the RMS Titanic resting on the ocean floor as videotape of the British luxury liner, which sank in 1912, was released by the Woods Hole Oceanographic Institution.

In 1989, actress Rebecca Schaeffer, 21, was shot to death at her Los Angeles home by obsessed fan Robert Bardo, who was later sentenced to life in prison.

In 2013, once the very symbol of American industrial might, Detroit became the biggest U.S. city to file for bankruptcy, its finances ravaged and its neighborhoods hollowed out by a long, slow decline in population and auto manufacturing.

Ten years ago: The Taliban posted a video of an American soldier who’d gone missing June 30, 2009 from his base in eastern Afghanistan and was later confirmed to have been captured; in the recording, the soldier (later identified as Pfc. Bowe Bergdahl) said he was “scared I won’t be able to go home.” (Bergdahl was released in 2014; he was later given a dishonorable discharge and fined $1,000 on charges of desertion and misbehavior.)

Five years ago: The United Nations Security Council held an emergency meeting a day after the downing of Malaysia Airlines Flight 17 with the loss of all 298 people on board, demanding that pro-Russia rebels who controlled the eastern Ukraine crash site give immediate, unfettered access to independent investigators. The Obama administration announced it was reopening the Eastern Seaboard to offshore oil and gas exploration.

One year ago: The 12 Thai youth soccer teammates and their coach who were trapped in a flooded cave for more than two weeks were released from the hospital. FBI Director Christopher Wray said Russia was continuing to use fake news, propaganda and covert operations to sow discord in the United States. European regulators fined Google a record $5 billion for forcing cellphone makers that use the company’s Android operating system to install Google’s search and browser apps. California’s Supreme Court decided that a measure to divide the state into three parts would not appear on the November ballot. California’s Highway 1 near big Sur reopened, 14 months after it was blocked by a massive landslide.