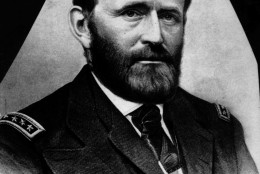 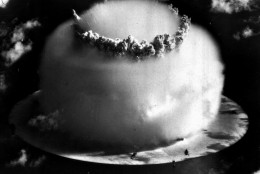 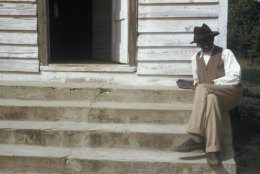 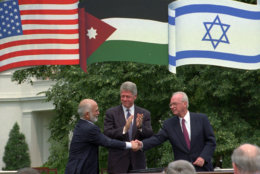 On July 25, 1960, a Woolworth’s store in Greensboro, North Carolina, that had been the scene of a sit-in protest against its whites-only lunch counter dropped its segregation policy.

In 1866, Ulysses S. Grant was named General of the Army of the United States, the first officer to hold the rank.

In 1946, the United States detonated an atomic bomb near Bikini Atoll in the Pacific in the first underwater test of the device.

In 1952, Puerto Rico became a self-governing commonwealth of the United States.

In 1956, the Italian liner SS Andrea Doria collided with the Swedish passenger ship Stockholm off the New England coast late at night and began sinking; 51 people — 46 from the Andrea Doria, five from the Stockholm — were killed. (The Andrea Doria capsized and sank the following morning.)

In 1972, the notorious Tuskegee syphilis experiment came to light as The Associated Press reported that for the previous four decades, the U.S. Public Health Service, in conjunction with the Tuskegee Institute in Alabama, had been allowing poor, rural black male patients with syphilis to go without treatment, even allowing them to die, as a way of studying the disease.

In 1978, Louise Joy Brown, the first “test tube baby,” was born in Oldham, England; she’d been conceived through the technique of in-vitro fertilization.

In 1984, Soviet cosmonaut Svetlana Savitskaya (sah-VEETS’-kah-yah) became the first woman to walk in space as she carried out more than three hours of experiments outside the orbiting space station Salyut 7.

In 1985, a spokeswoman for Rock Hudson confirmed that the actor, hospitalized in Paris, was suffering from AIDS. (Hudson died in October 1985.)

In 1986, movie director Vincente Minnelli, known for such musicals as “Gigi,” ”An American in Paris” and “Meet Me in St. Louis,” died in Los Angeles at age 83.

In 2000, a New York-bound Air France Concorde crashed outside Paris shortly after takeoff, killing all 109 people on board and four people on the ground; it was the first-ever crash of the supersonic jet.

In 2002, Zacarias Moussaoui (zak-uh-REE’-uhs moo-SOW’-ee) declared he was guilty of conspiracy in the September 11 attacks, then dramatically withdrew his plea at his arraignment in Alexandria, Va.

Ten years ago: President Barack Obama continued his full-court press to pass health care reform legislation, citing a new White House study indicating that small businesses were paying far more per employee for health insurance than big companies, a disparity the president said was “unsustainable” as well as “unacceptable.” Protesters across the world called on Iran to end its clampdown on opposition activists.

Five years ago: President Barack Obama met at the White House with the presidents of Guatemala, Honduras and El Salvador; afterward, he urged the leaders and congressional Republicans to help ease the influx of minors and migrant families crossing the southwest border of the United States.

One year ago: After a White House meeting, President Donald Trump and European Commission President Jean-Claude Juncker (zhahn-KLOHD’ YUN’-kur) announced they had agreed to work toward “zero tariffs” and “zero subsidies” on non-automobile goods, dialing down tensions that had been rising. Sergio Marchionne (SEHR’-jee-oh mar-kee-OH’-nay), the founding CEO of Fiat Chrysler who saved two carmakers from near-certain failure, died at the age of 66 after complications from surgery in Switzerland. A study published in the journal Science revealed that a huge lake of salty water appears to be buried deep in Mars, raising the possibility of finding life on the planet. Undefeated Triple Crown winner Justify was retired to stud because of swelling in an ankle; the colt had won all six career starts.