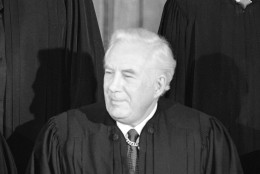 In 1537, Spanish explorer Pedro de Mendoza, the founder of Buenos Aires, died aboard his ship while heading back to Spain.

In 1836, Congress approved the Deposit Act, which contained a provision for turning over surplus federal revenue to the states.

In 1868, Christopher Latham Sholes received a patent for his “Type-Writer,” featuring a QWERTY keyboard; it was the first commercially successful typewriter.

In 1892, the Democratic National Convention in Chicago nominated former President Grover Cleveland on the first ballot.

In 1938, the Civil Aeronautics Authority was established.

In 1947, the Senate joined the House in overriding President Harry S. Truman’s veto of the Taft-Hartley Act, designed to limit the power of organized labor.

In 1968, a syndicated newspaper column by Joseph Kraft coined the term “Middle America.”

In 1969, Warren E. Burger was sworn in as chief justice of the United States by the man he was succeeding, Earl Warren.

In 1985, all 329 people aboard an Air India Boeing 747 were killed when the plane crashed into the Atlantic Ocean near Ireland because of a bomb authorities believe was planted by Sikh separatists.

In 1988, James E. Hansen, a climatologist at the Goddard Institute for Space Studies, told a Senate panel that global warming of the earth caused by the “greenhouse effect” was a reality.

In 1995, Dr. Jonas Salk, the medical pioneer who developed the first vaccine to halt the crippling rampage of polio, died in La Jolla (HOY’-ah), California, at age 80.

Ten years ago: Hardening the U.S. reaction to Iran’s disputed elections and bloody aftermath, President Barack Obama condemned the violence against protesters and lent his strongest support yet to their accusations that the hardline victory was a fraud. “Tonight Show” sidekick Ed McMahon died in Los Angeles at 86. Dr. Jerri Nielsen FitzGerald, who’d diagnosed and treated her own breast cancer before a dramatic rescue from a South Pole station, died in Southwick, Massachusetts, at 57.

Five years ago: U.S. Secretary of State John Kerry, visiting Baghdad, told leaders of Iraq’s factions they had to keep their commitments to seat a new parliament before a Sunni insurgency swept away hopes for a lasting peace. President Barack Obama, speaking at the White House Summit on Working Families, said the United States should join the rest of the industrialized world and offer paid leave for mothers of newborns. Dominik Hasek (HAH’-shik), Peter Forsberg, Rob Blake, Mike Modano (moh-DAH’-noh) and coach Pat Burns and referee Bill McCreary were elected to the Hockey Hall of Fame.

One year ago: Trump administration officials said the government knew the location of all children in its custody after separating them from their families at the border, and that it was working to reunite them. The Vatican tribunal convicted a former Holy See diplomat, Monsignor Carlo Capella, and sentenced him to five years in prison for possessing and distributing child pornography.