Today in History: May 29 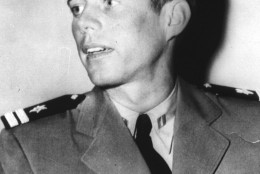 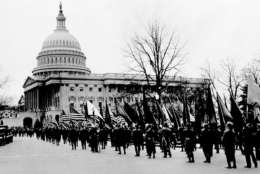 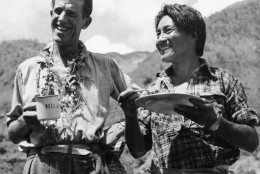 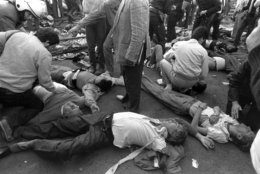 On May 29, 1953, Mount Everest was conquered as Edmund Hillary of New Zealand and Tensing Norgay of Nepal became the first climbers to reach the summit.

In 1765, Patrick Henry denounced the Stamp Act before Virginia’s House of Burgesses.

In 1914, the Canadian ocean liner RMS Empress of Ireland sank in the St. Lawrence River in eastern Quebec after colliding with the Norwegian cargo ship SS Storstad; of the 1,477 people on board the Empress of Ireland, 1,012 died. (The Storstad suffered only minor damage.)

In 1917, the 35th president of the United States, John Fitzgerald Kennedy, was born in Brookline, Massachusetts.

In 1932, World War I veterans began arriving in Washington to demand cash bonuses they weren’t scheduled to receive until 1945.

In 1954, English runner Diane Leather became the first woman to run a sub-five-minute mile, finishing in 4:59.6 during the Midland Championships in Birmingham.

In 1977, Janet Guthrie became the first woman to race in the Indianapolis 500, finishing in 29th place (the winner was A.J. Foyt).

In 1985, 39 people were killed at the European Cup Final in Brussels, Belgium, when rioting broke out and a wall separating British and Italian soccer fans collapsed.

In 2008, the Vatican issued a decree stating that anyone trying to ordain a woman as a priest and any woman who attempted to receive the ordination would incur automatic excommunication. Actor-comedian Harvey Korman, Emmy winner for “The Carol Burnett Show,” died in Los Angeles at age 81.

Ten years ago: A judge in Los Angeles sentenced music producer Phil Spector to 19 years to life in prison for the murder of actress Lana Clarkson. Jay Leno hosted “The Tonight Show” on NBC supposedly for the final time, giving up his desk to Conan O’Brien. (After a stint in prime time, Leno returned to “Tonight” in March 2010, stepping down again in February 2014.)

Five years ago: Saying he wanted kids to play sports but play safely, President Barack Obama called for more and better research into the effects and treatment of concussions in youth athletes during a summit at the White House. The Food and Drug Administration required tanning beds and sun lamps to carry new warnings that they should not be used by anyone under age 18. Shelly Sterling signed a binding contract to sell the Los Angeles Clippers to former Microsoft CEO Steve Ballmer for a record-breaking $2 billion.

One year ago: ABC canceled the reboot of “Roseanne,” after star Roseanne Barr’s tweet that referred to former Obama adviser Valerie Jarrett as a product of the Muslim Brotherhood and the “Planet of the Apes.” Starbucks closed thousands of stores for part of the day to hold training sessions for employees on unconscious bias, in response to the arrests of two black men in Philadelphia at one of its stores.