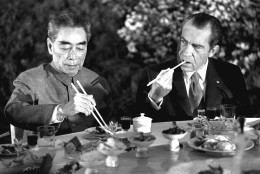 On Feb. 21, 1972, President Richard M. Nixon began his historic visit to China as he and his wife, Pat, arrived in Beijing.

In 1613, Mikhail Romanov, 16, was unanimously chosen by Russia’s national assembly to be czar, beginning a dynasty that would last three centuries.

In 1911, composer Gustav Mahler, despite a fever, conducted the New York Philharmonic at Carnegie Hall in what turned out to be his final concert (he died the following May).

In 1916, the World War I Battle of Verdun began in France as German forces attacked; the French were able to prevail after 10 months of fighting.

In 1945, during the World War II Battle of Iwo Jima, the escort carrier USS Bismarck Sea was sunk by kamikazes with the loss of 318 men.

In 1958, the USS Gudgeon (SS-567) became the first American submarine to complete a round-the-world cruise, eight months after departing from Pearl Harbor in Hawaii.

In 1965, black Muslim leader and civil rights activist Malcolm X, 39, was shot to death inside Harlem’s Audubon Ballroom in New York by assassins identified as members of the Nation of Islam. (Three men were convicted of murder and imprisoned; all were eventually paroled.)

In 1973, Israeli fighter planes shot down Libyan Arab Airlines Flight 114 over the Sinai Desert, killing all but five of the 113 people on board.

In 1975, former Attorney General John N. Mitchell and former White House aides H.R. Haldeman and John D. Ehrlichman were sentenced to 2 1/2 to 8 years in prison for their roles in the Watergate cover-up (each ended up serving a year and a-half).

In 1986, Larry Wu-tai Chin, the first American found guilty of spying for China, killed himself in his Virginia jail cell.

In 1992, Kristi Yamaguchi (yah-mah-GOO’-chee) of the United States won the gold medal in ladies’ figure skating at the Albertville Olympics; Midori Ito (mee-doh-ree ee-toh) of Japan won the silver, Nancy Kerrigan of the U.S., the bronze.

In 2000, Consumer advocate Ralph Nader announced his entry into the presidential race, bidding for the nomination of the Green Party.

In 2013, Drew Peterson, the Chicago-area police officer who gained notoriety after his much-younger fourth wife, Stacy Peterson, vanished in 2007, was sentenced to 38 years in prison for murdering his third wife, Kathleen Savio.

Ten years ago: In a last full day of talks in Asia, U.S. Secretary of State Hillary Rodham Clinton stressed American and Chinese cooperation on the economy and climate change. House Speaker Nancy Pelosi met with Afghan President Hamid Karzai in Kabul to discuss the ongoing American strategic review of the U.S. mission in Afghanistan.

Five years ago: President Barack Obama granted an audience to Tibet’s Dalai Lama over the strong objections from China that the U.S. was meddling it its affairs. Matteo Renzi formed a coalition government in Italy; at 39, he became the country’s youngest premier ever. At age 18, Mikaela Shiffrin of the U.S. made Alpine skiing history as the youngest ever winner of an Olympic slalom gold medal, finishing 0.53 seconds faster than Austrian Marlies Schild.

One year ago: The Rev. Billy Graham, a confidant of presidents and the most widely heard Christian evangelist in history, died at his North Carolina home; he was 99. A week after the Florida school shooting, President Donald Trump met with teen survivors of school violence and parents of slain children; Trump promised to be “very strong on background checks” and suggested he supported letting some teachers and other school employees carry weapons. Thousands of protesters swarmed the Florida state Capitol, calling for changes to gun laws, a ban on assault-type weapons and improved care for the mentally ill. The NBA fined Dallas Mavericks owner Mark Cuban $600,000 for saying he had recently told some of his players that “losing is our best option.” (The Mavericks had one of the league’s worst records, putting them in position to land a high draft pick.)