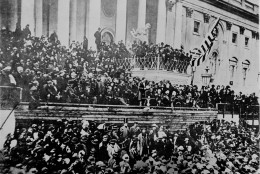 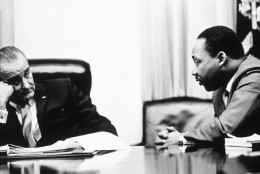 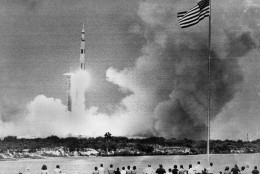 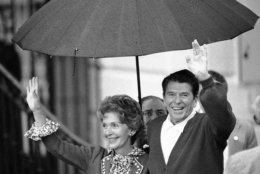 In 1865, President Abraham Lincoln spoke to a crowd outside the White House, saying, “We meet this evening, not in sorrow, but in gladness of heart.” (It was the last public address Lincoln would deliver.)

In 1921, Iowa became the first state to impose a cigarette tax, at 2 cents a package.

In 1947, Jackie Robinson of the Brooklyn Dodgers played in an exhibition against the New York Yankees at Ebbets Field, four days before his regular-season debut that broke baseball’s color line. (The Dodgers won, 14-6.)

In 1951, President Harry S. Truman relieved Gen. Douglas MacArthur of his commands in the Far East.

In 1961, former SS officer Adolf Eichmann went on trial in Israel, charged with crimes against humanity for his role in the Nazi Holocaust. (Eichmann was convicted and executed.)

In 1966, Frank Sinatra recorded the song “Strangers in the Night” for his label, Reprise (rih-PREEZ’) Records.

In 1968, President Lyndon B. Johnson signed into law the Civil Rights Act of 1968, which included the Fair Housing Act, a week after the assassination of Martin Luther King Jr.

In 1970, Apollo 13, with astronauts James A. Lovell, Fred W. Haise and Jack Swigert, blasted off on its ill-fated mission to the moon.

In 1981, President Ronald Reagan returned to the White House from the hospital, 12 days after he was wounded in an assassination attempt. Race-related rioting erupted in the Brixton district of south London.

In 2002, U.S. Rep. James A. Traficant Jr., D-Ohio, was convicted of taking bribes and kickbacks from businessmen and his own staff. (Traficant was later expelled from Congress and sentenced to eight years in prison; he was released in September 2009.)

Ten years ago: A 16-nation Asian summit in Bangkok, Thailand, was canceled after demonstrators stormed the venue. Boston University won its fifth NCAA hockey championship, defeating Miami (Ohio) 4-3 in overtime. Susan Boyle, a middle-aged volunteer church worker, wowed judges and audiences alike with her soaring rendition of “I Dreamed a Dream” from the musical “Les Miserables” on the British TV show “Britain’s Got Talent.”

Five years ago: President Barack Obama, in a fiery speech at civil rights activist Al Sharpton’s National Action Network conference, accused the GOP of using voting restrictions to keep voters from the polls and of jeopardizing 50 years of expanded ballot box access for millions of black Americans and other minorities. White House budget director Sylvia Mathews Burwell was named by President Obama to succeed Health and Human Services Secretary Kathleen Sebelius. In a rare diplomatic rebuke, the United States blocked Iran’s controversial pick for envoy to the United Nations, Hamid Aboutalebi, a member of the group responsible for the 1979 takeover of the U.S. Embassy in Tehran.

One year ago: House Speaker Paul Ryan announced that he would retire rather than seek another term in Congress. California Gov. Jerry Brown accepted President Donald Trump’s call to send the National Guard to the Mexican border but said the troops would have nothing to do with immigration enforcement. Pope Francis admitted he made “grave errors” in judgment in Chile’s sex abuse scandal; during a January visit to Chile, Francis had strongly defended Bishop Juan Barros despite accusations by victims that Barros had witnessed and ignored their abuse. A military transport plane crashed just after takeoff in Algeria, killing 257 people in the worst aviation disaster in the history of the North African country. Mitzi Shore, owner of the Los Angeles club the Comedy Store, died at the age of 87.