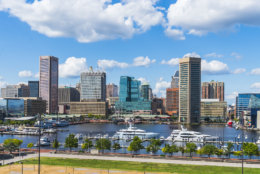 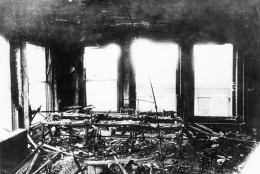 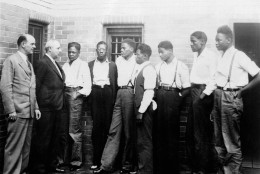 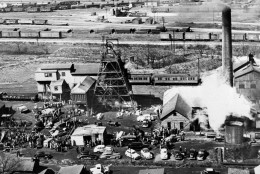 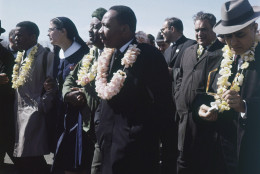 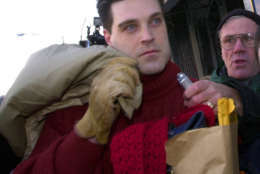 On March 25, 1911, 146 people, mostly young female immigrants, were killed when fire broke out at the Triangle Shirtwaist Co. in New York.

In 1865, during the Civil War, Confederate forces attacked Fort Stedman in Virginia but were forced to withdraw because of counterattacking Union troops.

In 1894, Jacob S. Coxey began leading an “army” of unemployed from Massillon (MA’-sih-luhn), Ohio, to Washington D.C., to demand help from the federal government.

In 1915, the U.S. Navy lost its first commissioned submarine as the USS F-4 sank off Hawaii, claiming the lives of all 21 crew members.

In 1931, in the so-called “Scottsboro Boys” case, nine young black men were taken off a train in Alabama, accused of raping two white women; after years of convictions, death sentences and imprisonment, the nine were eventually vindicated.

In 1947, a coal-dust explosion inside the Centralia Coal Co. Mine No. 5 in Washington County, Illinois, claimed 111 lives; 31 men survived.

In 1965, the Rev. Martin Luther King Jr. led 25,000 people to the Alabama state capitol in Montgomery after a five-day march from Selma to protest the denial of voting rights to blacks. Later that day, civil rights activist Viola Liuzzo, a white Detroit homemaker, was shot and killed by Ku Klux Klansmen.

In 1975, King Faisal (FY’-suhl) of Saudi Arabia was shot to death by a nephew with a history of mental illness. (The nephew was beheaded in June 1975.)

In 1988, in New York City’s so-called “Preppie Killer” case, Robert Chambers Jr. pleaded guilty to first-degree manslaughter in the death of 18-year-old Jennifer Levin. (Chambers received 5 to 15 years in prison; he was released in 2003 after serving the full sentence.)

In 1990, 87 people, most of them Honduran and Dominican immigrants, were killed when fire raced through an illegal social club in New York City.

In 1991, “Dances with Wolves” won seven Oscars, including best picture in a category that also included “Goodfellas,” at the 63rd annual Academy Awards; Kathy Bates won best actress for “Misery” while Jeremy Irons received best actor for “Reversal of Fortune.”

In 2006, In Los Angeles, half a million people marched to protest federal legislation to make illegal immigration a felony and build more walls along the border.

Ten years ago: Pirates seized the Panama-registered, Greek-owned Nipayia with 18 Filipino crew members and a Russian captain off the Somali coastline. (The ship and crew were released in May 2009.) John Hope Franklin, a towering scholar of African-American studies, died in Durham, N.C. at age 94. Dan Seals, half of the pop duo England Dan and John Ford Coley, later a top country singer (“You Still Move Me”), died in Nashville at age 61.

Five years ago: Following a two-day security summit in The Netherlands, President Barack Obama declared that the gathering had taken “concrete steps” to prevent nuclear material falling into the hands of terrorists even though Russia and China failed to sign an agreement to beef up inspections.

One year ago: In an interview with “60 Minutes,” adult film star Stormy Daniels said she had been threatened and warned to keep silent about an alleged sexual encounter with Donald Trump in 2006. A fire at a shopping mall in a Siberian city in Russia killed more than 60 people, including 41 children. Former Pennsylvania Republican Sen. Rick Santorum told CNN that students who have rallied for gun control should instead learn CPR or find their own way to prevent a school shooting. Gun manufacturer Remington filed for bankruptcy reorganization amid years of slumping sales and legal and financial pressure from the Sandy Hook school massacre in Connecticut. Linda Brown, who as a young girl in Kansas became embroiled in a landmark 1954 Supreme Court case that challenged segregation in public schools, died at the age of 75.