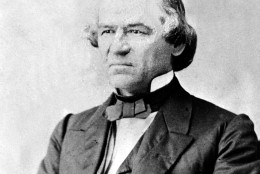 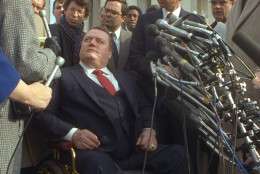 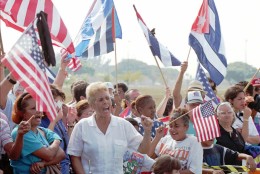 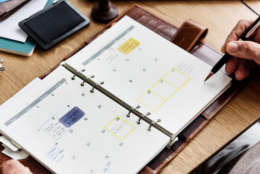 On Feb. 24, 1942, the SS Struma, a charter ship attempting to carry nearly 800 Jewish refugees from Romania to British-mandated Palestine, was torpedoed by a Soviet submarine in the Black Sea; all but one of the refugees perished.

In 1582, Pope Gregory XIII issued an edict outlining his calendar reforms. (The Gregorian Calendar is the calendar in general use today.)

In 1761, Boston lawyer James Otis Jr. went to court to argue against “writs of assistance” that allowed British customs officers to arbitrarily search people’s premises, declaring: “A man’s house is his castle.” (Although Otis lost the case, his statement provided early inspiration for American independence.)

In 1868, the U.S. House of Representatives impeached President Andrew Johnson by a vote of 126-47 following his attempted dismissal of Secretary of War Edwin M. Stanton; Johnson was later acquitted by the Senate.

In 1920, the German Workers Party, which later became the Nazi Party, met in Munich to adopt its platform.

In 1955, the Cole Porter musical “Silk Stockings” opened at the Imperial Theater on Broadway.

In 1983, a congressional commission released a report condemning the internment of Japanese-Americans during World War II as a “grave injustice.”

In 1988, in a ruling that expanded legal protections for parody and satire, the Supreme Court unanimously overturned a $150,000 award that the Rev. Jerry Falwell had won against Hustler magazine and its publisher, Larry Flynt.

In 1989, a state funeral was held in Japan for Emperor Hirohito, who had died the month before at age 87.

In 1996, Cuba downed two small American planes operated by the group Brothers to the Rescue that it claimed were violating Cuban airspace; all four pilots were killed.

Ten years ago: In the first prime-time speech of his term, President Barack Obama appeared before Congress to sketch an agenda that began with jobs, then broadened quickly to include a stable credit system, better schools, health care reform, reliable domestic sources of energy and an end to the war in Iraq. Earlier in the day, President Obama held an 80-minute private talk with Japanese Prime Minister Taro Aso.

One year ago: The U.N. Security Council unanimously demanded a 30-day cease-fire across Syria to deliver humanitarian aid and evacuate the wounded, as the death toll reached 500 from a Syrian bombing campaign in the rebel-held suburbs of Damascus. (The cease-fire failed to take hold.) The body of the Rev. Billy Graham arrived at the library bearing his name in Charlotte, North Carolina, where Graham would lie in repose for two days. At the Winter Olympics in South Korea, American men won the gold medal in curling in a decisive upset of Sweden; it was only the second curling medal in U.S. history.