Wes Moore was sworn-in Wednesday, becoming Maryland’s first Black governor in a historic inauguration at the state capitol in Annapolis.

Moore took the oath of office twice — first during a ceremony in the Maryland state Senate chamber and later in a public ceremony outside the state house before a large crowd. In both, he pledged to “bear true allegiance to the state of Maryland,” with his hand pressed on two Bibles — one owned by his grandfather and the other once owned by abolitionist Frederick Douglass, who was born into slavery in Maryland.

Aruna Miller, Maryland’s lieutenant governor-elect, was also sworn in Wednesday. An immigrant from India who came to the U.S. at age 7, Miller is the first woman of color and the first immigrant to hold the job.

Moore’s public swearing-in, which was administered by Chief Justice of the Maryland Supreme Court Matthew J. Fader, was followed by a 19-gun salute and a flyover.

The 19 gun salute and flyover for Wes Moore’s inauguration pic.twitter.com/5OLjynf5qa

In his inaugural address, Moore pledged “bold” policies and offered a bipartisan vision that he said would sidestep the “false choices” of traditional partisan politics.

Moore said he would tackle the racial wealth gap, protect the Chesapeake Bay and fight pollution, and put the state on track to generate 100% of clean energy by 2035, saying “clean energy will define our economy.”

On education, he pledged “high quality, highly inclusive schools” and pledged a service year option for all high school graduates.

Moore, who made “Leave No One Behind,” his campaign rallying cry, declared, “We must govern on big principles and not on petty differences.”

The inaugural ceremony drew a crowd of hundreds, including political dignitaries, and state and local officeholders.

Oprah Winfrey, a longtime friend who prominently backed Moore in the Democratic primary, introduced the new governor. In her remarks, she recalled the eight years she lived in Maryland in her twenties, working a news anchor and talk show host in Baltimore.

Maryland, she said, is where she discovered her passion.

“Maryland is full to the brim with opportunity. It was back then; it is now. And I know that with Wes Moore as your governor, Maryland’s best days lie ahead,” Winfrey said.

“Wes never shrank from his duty and his commitment never wavered,” Martinez said.

In her address, Miller, Maryland’s new lieutenant governor and a former two-term state delegate from Montgomery County, recalled how her parents took a leap of faith to come to the U.S. “because they believed in the promise of America,” while also saying she would work to “address the inequities of the past and build a Maryland where everyone can thrive.”

Miller, who took the oath on a copy of the Bhagavad Ghita, one of the of holy scriptures of the Hindu faith, was introduced by her children.

Supporters who attended the ceremony interviewed by WTOP said they were energized and inspired by the event and said the governor’s message of not leaving anyone behind resonated with them.

Wanda Peterson Parker, from Fort Washington, Maryland, said she came to the inauguration to witness history being made with the state’s first African American governor.

“And my hope is that we’re truly able to leave no one behind,” she said, echoing one of Moore’s campaign slogans.

She said she would like the Moore administration to tackle equity and health care as priorities.

Her message to the new governor: “Stay focused and remember why you’re there and we’re praying for you,” she said.

Veronica and Ryan Grant, who live in Annapolis, also referenced the Moore campaign slogan of leaving no one behind.

“And that means people that supported him and people who did not support him, he’s still saying ‘No one left behind,'” Veronica Grant said. “I believe it.”

Torris Battle, a bus operator who lives in Glen Burnie, said he was inspired by Moore’s speech and said he was heartened by the idea of higher wages for workers. He said he’s looking to buy a home as a first-time homebuyer and hopes Moore’s policies will help. 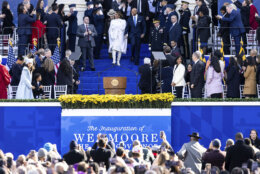 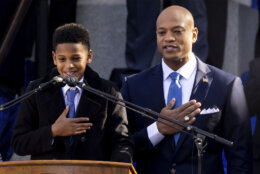 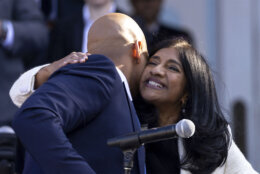 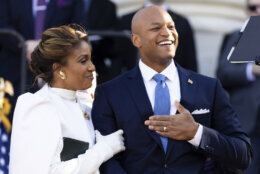 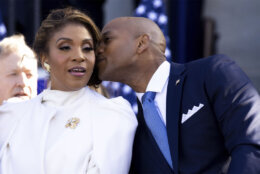 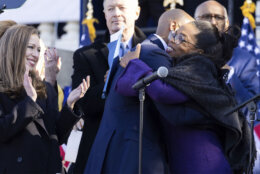 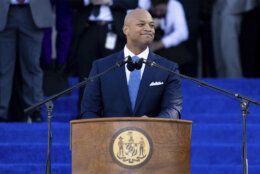 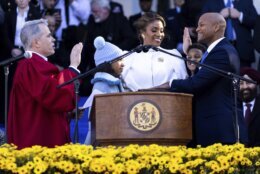 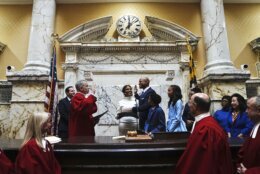 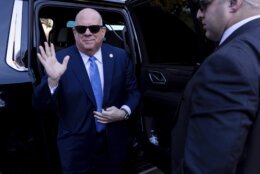 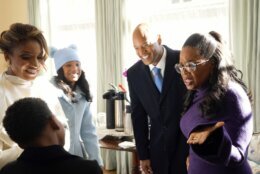 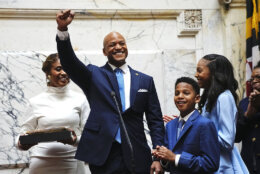 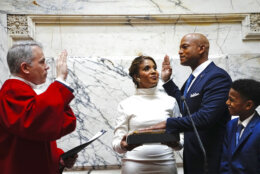 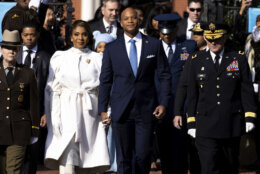 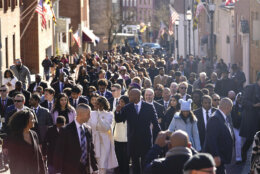 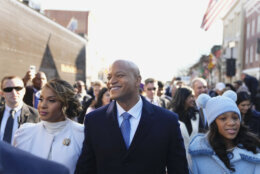 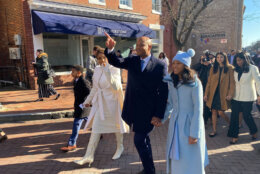 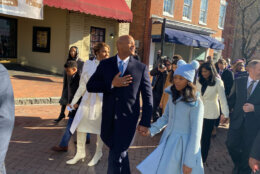 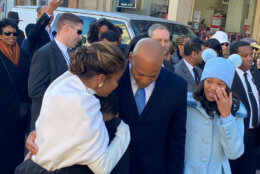 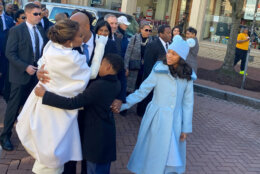 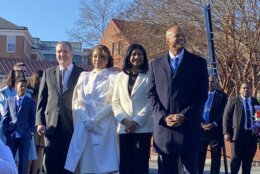 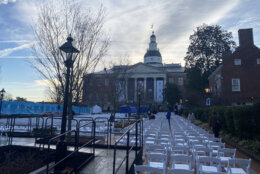 Betty Squire and Cheryl Pulley, both of Baltimore, said they both attend the same church as Moore, Southern Baptist Church.

Pulley acknowledged the challenging times Moore encounter in office. “But I do think he’s up for the job,” she said. “I think he has the stamina and the knowledge and the ability to get it done.”

The inaugural festivities began Wednesday morning, with a wreath laying at the Kunta Kinte-Alex Haley Memorial at the City Dock in Annapolis, which commemorates the arrival of enslaved people in Maryland.

Moore and his wife, Dawn Flythe Moore, and two children walked up Main Street to Government House in Annapolis ahead of the swearing-in, accompanied by Miller and her family and surrounded by a large crowd.

Tickets for the main ballroom at the evening’s inaugural ball at the Baltimore Convention Center, set for 7 p.m. Wednesday, have already sold out, but there were still limited “second-stage” tickets as of Wednesday morning.

The ceremonies took place under a newly-restored Maryland State House dome. The $7.5 million project to restore the dome included replacing shingles, wood trim and windows. The project was completed earlier this month. The Maryland state house is the oldest U.S. state capitol in continuous legislative use.

As governor, Moore succeeds Republican Gov. Larry Hogan, who left office with a 77% approval rating and is widely thought to be eyeing a 2024 presidential run.

While former Republican Gov. Larry Hogan often clashed with the Democratically-controlled General Assembly, there will likely be fewer political fireworks now that Moore, a Democrat, is in office.

“You’re going to see Moore much more in line with the assembly with regard to the desire to spend more money on education,” said Todd Eberly, a political science professor at St. Mary’s College of Maryland. “That’s probably one of the first changes you’ll see.”

Still, Eberly said he doesn’t expect that state lawmakers will go along with Moore on every one of his ideas.

“The governor and the assembly sometimes have different priorities and nothing is guaranteed,” Eberly said. “There’s going to be a contingent of folks who don’t necessarily want to run too far too fast.”

Moore outlined some of his top priorities during his inaugural address Wednesday, including tackling the racial wealth gap and implementing a service year option for high school graduates that would provide job training and mentorship.

“The biggest thing we have to wait for is the details,” said Eberly.

For example, Moore has not said how much a service year option would cost or what the structure of such a program would look like.

Moore has also not said exactly what he plans to do to address the racial wealth gap.

“It’s a completely laudable goal, but I just wonder if it’s a problem that any one state could address,” Eberly said.

WTOP’s John Domen and Nick Iannelli contributed to this report.

As many as 80K Marylanders could lose Medicaid eligibility