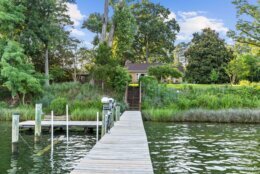 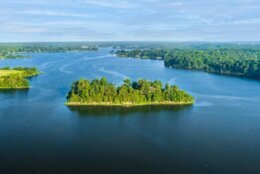 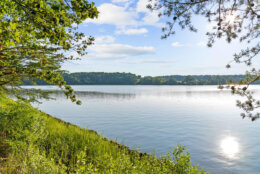 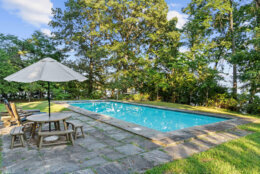 It doesn’t come cheap, but it turns out you don’t have to go very far from D.C. to own your own island.

Tippity Wichity Island, and the three-bedroom house on it, is for sale for the first time since the late 1970s, said David DeSantis of TTR Sotheby’s International Realty.

“I think it’s a great combination of history and a really tremendous opportunity to have a very private, secluded vacation spot,” he told WTOP.

To get to Tippity Wichity Island, you need to drive about 90 minutes from D.C. into St. Mary’s County, Maryland, and then take a quick boat ride to the middle of the St. Mary’s River.

It’s pretty removed, DeSantis said, and it might not be for everyone: “I guess it depends on how much of a people person you are, right?”

The current owners use it as a summer house, although “I suppose that if you wanted to live there full time, you could,” DeSantis said — the house does have electrical service as well as a generator.

The island has arrowheads and shards of pottery in various places – signs of a Native American settlement – and was called Lynch Island before it was bought by Capt. Henry Howgate in 1879.

There are a bunch of theories as to how Howgate – a Civil War captain of whom it can’t be said for sure what side he fought on – came up with the new name, but it’s commonly believed that he started a brothel on the island.

Kayaking Southern Maryland’s favorite theory is that “tipitiwitchet” is a nod to the brothel history: the name 18th-century British botanists used to refer to the Venus flytrap, which they thought looked like – well, you know.

Anyway, DeSantis said the asking price for the house is $2.1 million — “Admittedly, it’s hard to find comparables for a private island; I think that we were shooting a little bit in the dark when we came up with the price” – and that they’ve already got a few showings lined up.