Holidays: 'Enchant' shines with millions of lights in Nats Park | Where to see holiday lights | Send in photos of decorations | How to give greener this season
Home » Maryland News » Expansion of Maryland 'move… 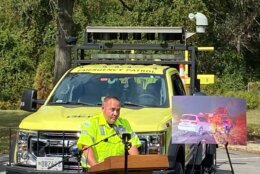 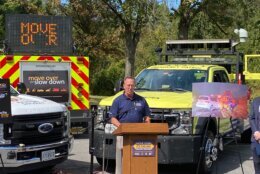 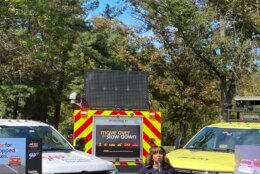 Starting Saturday, drivers who come across a disabled vehicle on Maryland roads will need to “move over.”

The state is expanding its “move over” law, which requires motorists to move over when approaching emergency, law enforcement, tow truck, utility and transportation vehicles while they are stopped, standing or parked on a highway with lights flashing. Or, if moving over is not possible, then drivers need to slow down.

As of Saturday, motorists must also make a lane change or slow down when approaching any stopped, standing, or parked vehicle displaying warning signals.

“Come Saturday, if you come across a disabled vehicle of any type on any road, you should move over to provide that vehicle with enough space so they can be safe and not have to be worried about risking their lives,” state Sen. Jeff Waldstreicher, who sponsored the legislation, said. “If you can’t move over, you’re moving too quick, or there’s just not enough room, then slow down.”

The expanded law was put in place to protect law enforcement, emergency responders and any motorist that may encounter a roadside emergency and must stop near travel lanes, the Maryland Department of Transportation said.

“My office is the highway,” Reeves said.

Reeves said that he has seen his share of close calls on the road, and he has honed that instinct that tells him when something could go wrong on the side of the road.

“You have a few seconds, but I do my best to not take my eyes off the traffic that’s coming at me,” he said.

He recalled an incident that happened recently, when his expertise and experience came in handy: “The rumble strips that I heard behind me sounded differently.”

It was just before 4 a.m. on the side of Interstate 83 in Baltimore, and the driver of the vehicle he had stopped for had already walked away. Reeves ran as a large SUV driven by someone he believes was impaired by alcohol slammed into his truck from behind.

“My life flashed before my eyes,” Reeves said. “While I’m fortunate that I was able to return home that morning and let my family … know that I was OK, it could have turned out very different,” he said. “This same situation could happen to anybody.”

Most stranded motorists do not have large trucks protecting them, and if Reeves’ truck had not been in the place where it had been, “if there was somebody out with that vehicle changing a tire, the result would have been devastating,” he said.

While the old move over law already applied to people, such as Reeves, who work on the sides of the road, he acknowledged that alcohol probably played a bigger role in the crash than ignorance of the law.

Reeves said every other driver deserves the same sort of protections that he has when on the side of the road, especially since they do not have the same expertise or awareness that he has cultivated.

“When you become stranded on the side of the highway, it’s not an everyday thing for most people,” said Reeves. “Sometimes it’s a once in a lifetime ordeal, and they just don’t know what to expect when they step out of the car on the shoulder.”

Move over laws in Maryland have been around for several years, but many drivers do not know about them.

“About 84% of Marylanders don’t know that there’s a move over law,” Kevin Anderson, the head of the Maryland Transportation Authority Police Department, said.

“Distracted, impaired, aggressive driving, as well as excessive speed, are leading causes of crashes throughout Maryland every year,” Jim Ports, Maryland’ transportation secretary, said. “In 2021, there were 563 fatalities in Maryland. That’s just not a number folks. That’s a mom, a dad, a sister or brother, niece, nephew, neighbor, members of our community.”

Ports said 350 people have died this year, too.

“The every day motorists deserve the same protection that we get,” Reeves said. Speaking at a news conference at a AAA operations center in Upper Marlboro Thursday. Move over, slow down, might sound like just another law. It’s not. It’s a lifesaver. Thank you.”

john domen | move over law | mover over slow down