The "Ghost Fleet" of the Potomac will be featured in one of 16 stamps launched Aug. 5 as part of a special series featuring the National Marine Sanctuaries.
Listen now to WTOP News WTOP.com | Alexa | Google Home | WTOP App | 103.5 FM

If you’re buying some stamps in the near future, you may notice a local landmark.

The “Ghost Fleet” of the Potomac will be featured on one of 16 stamps launched Aug. 5 as part of a special series featuring the National Marine Sanctuaries.

Peter Turcik of Edgewater, Maryland, took the photo featured on the stamp in 2016. He was working as a media specialist at the Chesapeake Conservancy when he got an assignment.

“My job was to go out and take photos of the Ghost Fleet during low tide,” Turcik said.

It was for a paddling guide as part of the effort to have Mallows Bay designated as a National Marine Sanctuary. The bay is home of the Ghost Fleet, which is the largest collection of historic shipwrecks in the Western Hemisphere.

The Ghost Fleet includes over 100 wooden steamships built for the U.S. Emergency Fleet during World War I, according to the Chesapeake Conservancy.

Tucik’s photo was taken from a special angle.

“I was on my kayak, and I actually laid down flat so that I could get it in the frame and be right at the water level. And it had this gorgeous sunset behind it,” Turcik said.

And the timing of the photo had to be just right.

“It had this gorgeous sunset behind it,” Turcik said. “One shot was horizontal, and then to sort of fill the frame better, I took a vertical one. And that photo was chosen to be the stamp,” he said.

It’s been over six years since he took the photo, but Turcik said it’s been worth the wait.

“It’s just about out and it’s extremely exciting,” he said. “We’ve been talking about this for so long that now that it’s finally out, it’s a little surreal.”

It’s great, he said, that the Ghost Fleet is now a National Marine Sanctuary and that the photo will remind people that it’s there in the Potomac.

“Mallows Bay is my favorite place to go in the Chesapeake region. It’s absolutely incredible,” Turcik said. “It’s a huge honor to have my photo memorialized for the foreseeable future.” 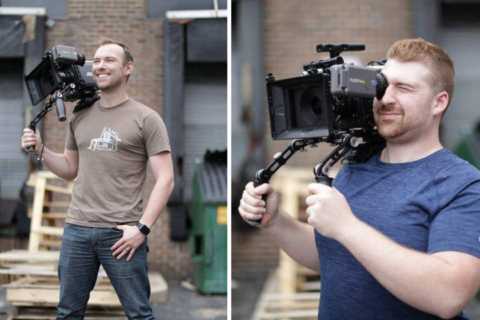