Maryland’s governors will no longer have a role in parole decisions and counties will be banned from entering into agreements with the federal government to hold detainees in their local jails, after a series of veto override votes in the General Assembly on Tuesday.
Listen now to WTOP News WTOP.com | Alexa | Google Home | WTOP App | 103.5 FM

Maryland’s governors will no longer have a role in parole decisions and counties will be banned from entering into agreements with the federal government to hold detainees in their local jails, after a series of veto override votes in the General Assembly on Tuesday.

The Maryland House of Delegates voted 92-46 to override Republican Gov. Lawrence J. Hogan Jr.’s veto of Senate Bill 202 Tuesday evening, one day after an override vote in the Senate, officially removing the governor from the parole process for people serving life sentences.

Under the legislation, people serving life sentences with the possibility of parole become eligible for release after serving the equivalent of 20 years, accounting for diminution credits. At least six members of the commission must vote in favor of their release.

House Minority Leader Jason Buckel (R-Allegany) argued that the bill allows dangerous individuals back onto the streets, noting that the suspect alleged to have killed 69-year-old Evelyn Player at Southern Baptist Church in Baltimore last month was paroled for violent crimes several times.

Del. Debra Davis (D-Charles), the only lawmaker to speak in favor of the override on the House floor, reminded colleagues that Maryland was one of only three states that required the governor to approve releases for life with the possibility of parole sentences, which she said inserts politics into the process.

Citing political pressures, former Gov. Parris N. Glendening (D) has shifted to supporting the reform to remove the governor from parole decisions, after maintaining a hard-line stance against granting parole during his eight years as governor.

The General Assembly also enacted House Bill 16, known as the Dignity Not Detention Act, on Tuesday. The bill bans counties from entering agreements with Immigration and Customs Enforcement (ICE) to hold detainees in their local jails and prohibits police from asking about people’s immigration status during traffic stops.

In back-to-back debates, the House voted 90-49 to override Hogan’s veto and the Senate enacted the policy on a party-line vote

“By casting a green vote and by overriding the governor’s veto on this, Maryland will send an extremely strong message that we are better than ICE, we are better than this depravity, we are better than for-profit family separation and we stand for the dignity for every single Marylander in this state,” Del. Vaughn Stewart (D-Montgomery), the bill’s sponsor, said from the House floor Tuesday afternoon.

The House overrode Hogan’s veto on a vote of 93-44, and the Senate enacted it after casting votes along party lines.

Immigration reform advocates watched the debates from the chamber galleries and cheered after the bills passed out of the House.

“The victory at the State House helps end the terror that immigrants face at the hands of ICE in stamping out private ICE detention and in cutting ICE’s access to immigrant driver data,” Gustavo Torres, the executive director of CASA Maryland, said in a statement Tuesday. “Better yet, it rejects the governor’s anti-immigrant policies, embracing the truth that immigrants are essential members of the Maryland family.”

Republicans in both chambers argued that the bills are bad policy that keep criminals on the streets during a time of rising crime.

Sen. Mary Beth Carozza (R-Lower Shore) spoke in opposition of House Bill 16, calling the policy foolish at a time when police agencies are understaffed, officers are demoralized and agencies “in many areas, [have] been defunded.”

Democrats also noted that neither bill would interfere with the enforcement of criminal proceedings.

“Let me be really clear: a violation of an immigration law is a civil violation. It is not a criminal violation,” said Del. Wanika Fisher (D-Prince George’s). “We need to stop conflating that immigrant equals criminal because it does not.”

Fisher said the reform would end the practice of profiting off of family separation.

House lawmakers voted Tuesday morning to override a bill that expands bargaining rights to employees at all of Maryland’s 16 community colleges. Similar bills have been introduced every year since 2014, but have rarely gotten past a first hearing.

“We are overjoyed to see both the House and Senate vote to override the governor’s needless veto. At last, Maryland law will be consistent and afford community college employees the same collective bargaining rights as countless other employees across the state,” said Travis B. Simon, Director of Political and Legislative Affairs at SEIU Local 500.

Other bills that were enacted Tuesday include:

Senate Bill 133/House Bill 319, which would allow local governments to apply the county income tax on a bracket basis. The change could result in lower local income tax rates for the lowest-income residents and higher rates for the wealthiest.

House Bill 1209, which would extend an 8% sales tax applied to ride-sharing apps.

House Bill 1003, which would require the governor and members of his cabinet to notify the General Assembly’s Legislative Policy Committee within 72 hours of executing an emergency contract during a state of emergency. 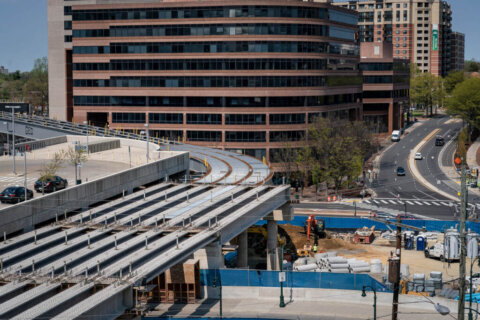