The redistricting panel, convened by Senate President Bill Ferguson (D-Baltimore City) and House Speaker Adrienne A. Jones (D-Baltimore County) is tasked with drawing up congressional and legislative maps for the General Assembly to consider. Lawmakers are set to return to Annapolis on Dec. 6 for a special session to handle congressional redistricting.

The four conceptual congressional maps are available online alongside information about the population and racial makeup of each district — but not the partisan political breakdown. Some of the configurations are vast departures from current maps, including two draft maps of a 1st District that crosses the Chesapeake Bay Bridge to include portions of Anne Arundel County alongside the Eastern Shore.

Commission Chair Karl Aro, a former head of the nonpartisan Department of Legislative Services, said in a statement that the conceptual maps are a baseline for public comment and based on testimony the commission has received in their public hearings so far.

“The approach that this commission has taken is to create a set of four Congressional map concepts for public comment,” Aro said. “It is our belief that Marylanders should see and comment on more than just a single map. Each of these four concepts represent a starting point for an approach that was grounded in testimony the commission heard.”

Aro added that, “to the extent practicable,” the maps aim to keep Marylanders in their current congressional districts.

“Portions of these districts have remained intact for at least 30 years and reflect a commitment to following the Voting Rights Act, protecting existing communities of interest, and utilizing existing natural and political boundaries,” Aro said. “It is our sincere intention to dramatically improve upon our current map while keeping many of the bonds that have been forged over 30 years or more of shared representation and coordination.”

The General Assembly, where Democrats hold a veto-proof majority in both the House of Delegates and the state Senate, will have the final say over redistricting in Maryland.

Marylanders who testified at the Legislative Redistricting Advisory Commission’s previous public meetings have urged the commission to release draft maps to the public, arguing that the public should have a chance to weigh in before the proposal heads to the General Assembly.

“It seems rather difficult for people to comment on the basis of a blank map,” Jacqueline Coolidge of the League of Women Voters told the panel at an online hearing in early October.

Gov. Lawrence J. Hogan Jr. (R) created a separate panel, the Maryland Citizens Redistricting Commission, to draw up congressional and legislative maps that he will propose to the General Assembly. That commission, which included three Republicans, three Democrats and three unaffiliated voters, finalized its redistricting proposal earlier this month. The congressional and legislative maps proposed by the Maryland Citizens Redistricting Commission are available online.

Hogan can veto congressional maps, and previously said he would oppose maps from the General Assembly that “don’t follow what the Citizens Redistricting Commission has come up with.” While Hogan could veto the congressional maps, Democrats easily overrode his vetoes on several measures during the 2021 legislative session.

The Legislative Redistricting Advisory Commission’s next public hearing is set for 6 p.m. Wednesday at Howard Community College’s Monteabaro Recital Hall of the Horowitz Visual and Performing Arts Center. The meeting will be livestreamed.

Md. Board of Education sets up framework to drop school mask mandates 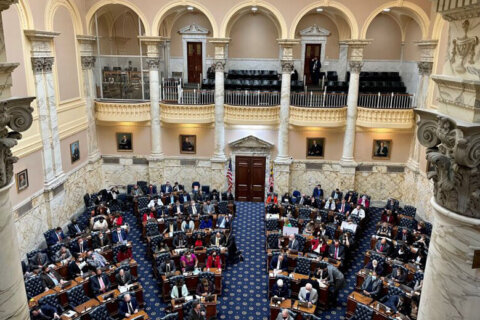