Record Powerball still unclaimed; but Md. lottery not worried (at least not yet)

The winner of the $731.1 million Powerball ticket sold in Maryland has not stepped forward yet, but Maryland lottery officials are not worried.
Listen now to WTOP News WTOP.com | Alexa | Google Home | WTOP App | 103.5 FM

News that a winning Power Ball ticket worth $731.1 million was sold in Allegany County last month sent shockwaves all over Maryland.

After all, it was the biggest jackpot ever won by someone in the Free State.

But while whoever won it may not stay a secret forever in small town Lonaconing — which sits along George’s Creek, a tributary of the northern branch of the Potomac River — laws allowing anonymity among lottery winners mean we may never know who had the winning ticket.

So far, the Maryland Lottery said it does not know who has that ticket. But the lottery is not worried.

“Oh no, especially with a jackpot of this size,” said lottery spokesperson Carole Gentry.

“Yes, they need time to just sort of absorb the fact they’ve won this incredible, life-changing jackpot. Then we advise them and say, ‘Go get some advice, a financial adviser, accountants, whatever you need to get your ducks in a row. Make sure you do that.’”

Beyond that, several winning tickets worth tens of thousands of dollars have not been claimed either. Sometimes it is because people need to check their tickets. Sometimes they are just bracing for what’s to come.

“We’ve never had anything of this size go unclaimed,” said Gentry. “We expect they’ll come forward in due course when they’re ready, and that’s OK.”

Of course, all of that is moot without having that winning ticket in your possession, so whoever won is advised to first sign the back of the ticket before putting it somewhere safe until it’s time to travel to the lottery’s headquarters in Baltimore to claim the prize.

“My guess is they are just taking their time,” she said. “I’m sure whomever has that ticket they’re just waiting to time it right for when they’re ready to come in.”

In the meantime, with so many other prizes sitting unclaimed, Gentry says now is a good time to give any tickets you tucked away in your wallet another look.

“We love to show the world that people play and people do actually win,” she said.

“We encourage everybody always check your tickets. There’s lots of prizes on these things.” 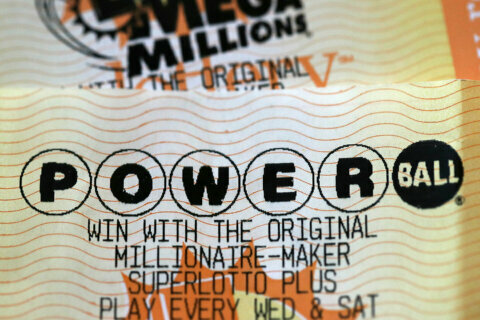