Marylanders are willing to pay more for public education, but are largely unaware of a reform effort that would dramatically boost state education spending, according to polling from Goucher College.
Listen now to WTOP News WTOP.com | Alexa | Google Home | WTOP App | 103.5 FM

Marylanders are willing to pay more for public education, but are largely unaware of a reform effort that would dramatically boost state education spending, according to polling from Goucher College.

About 70 percent of Maryland adults say the state spends too little on public education – and 74 percent of those reached by the most recent Goucher Poll said they would be willing to personally spend more to improve schools.

But only about 22 percent of those polled said they were aware of the work of the Kirwan Commission on Innovation and Excellence in Education, which has rolled out a decade-long reform plan that could cost about $3.8 billion more each year once fully implemented. Gov. Lawrence J. Hogan Jr. (R) has expressed concerns about the cost of the plan, referring to a funding workgroup as the Kirwan Tax Hike Commission in public statements, though the panel’s role is not to change state tax rates.

“A large percentage of Marylanders are really unaware of what the Kirwan Commission’s been doing,” said Mileah Kromer, the poll’s director. “Nobody knows what it is, so there is ample room to define Kirwan and it depends who’s going to do it.” 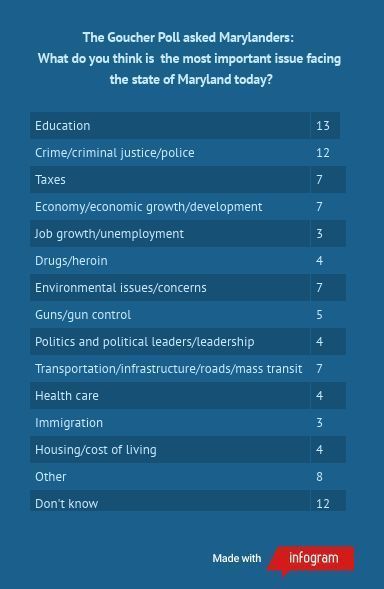 In a separate poll and announcement early Monday morning, Maryland’s largest teachers’ union launched a $500,000 plan to air ads throughout the state, aimed at boosting support for the Kirwan Commission’s reform plan.

The Maryland State Education Association ads will run for three weeks on network and cable television stations and online across the state. The ads will focus on teacher pay, educational disparities in different parts of the state, and additional resources for children who need them in the classroom, all key recommendations of the Kirwan Commission.

The union conducted its own public polling – of 500 registered voters by the firm GBAO Strategies from Sept. 9-11 – that also focused on school funding. The poll found that 62 percent of voters feel the state is spending too little on education, a figure slightly lower than the Goucher Poll’s result of 70 percent.

Teacher training and pay has become a central point of discussion among members of a workgoup meeting to rewrite the state’s education funding formulas. Last week, the panel discussed extending the implementation timeline for teachers to become nationally certified, which would lead to pay increases.

A question about the Kirwan Commission – with a favorable definition of the commission’s work – garnered support from 71 percent of respondents in the teachers’ poll.

The MSEA polling and ads are part of a broader effort to garner public support for the reform plan, including dozens of statewide forums.

“We have a once-in-a-generation opportunity to expand career and technical education programs, increase educator pay, better support struggling learners and students with special needs, hire more educators, and more equitably fund schools,” MSEA President Cheryl Bost said in a statement. “The General Assembly took the first step last year with its near-unanimous, bipartisan vote to pass the Blueprint for Maryland’s Future which adds funding for the next three years. This year we must pass a long-term funding plan that will create lasting educational equity and a more prosperous future for our state.”

The governor – who has recently ramped up a social media campaign against funding for the education plan, and potential tax increases in particular – remains popular across the state, with a statewide approval rating of 66 percent among registered voters. About 59 percent of Democrats, 66 percent of Independents and 81 percent of Republicans approved of the governor’s job performance in the Goucher poll.

Hogan’s approval ratings have not registered below 60 percent since October 2015.

It’s not surprising that his lack of support for the Kirwan Commission recommendations isn’t impacting his overall approval ratings, Kromer said.

“The public can’t fault Larry Hogan for not getting behind the Kirwan Commission and the recommendations – because they don’t know what Kirwan is,” she said.

Additionally, the governor campaigned last year on his prior support for education and has regularly tethered his administration’s focus to economic indicators.

A majority of Marylanders – 60 percent – held a mostly positive view of the state economy, while 29 percent held a mostly negative view. One in four said they think the state’s economy will continue to improve in the future.

But opinion about the direction of the state, though still more positive than negative, has fallen to 46 percent, the lowest point since Hogan took office in January 2015. Around this time last year, 54 percent said the state was heading in the right direction. Kromer said more polling is needed to determine the cause for the drop, which could be a blip or the start of a longer-term trend.

Education and the economy are the biggest challenges facing the state, poll respondents said.