Advocates and lawmakers want Marylanders to not only enjoy what the Chesapeake Bay has to offer but to also work actively to save it.

Officials believe when people feel connected to the parks and tributaries in the watershed, they’ll work to preserve the Chesapeake Bay for generations to come.

Members of Congress and local leaders met at the Annapolis waterfront on Earth Day’s 49th anniversary to discuss efforts to keep funding the Chesapeake Gateway and Watertrails Program run by the National Park Service.

The Gateway program is a federal, state and local partnership, and includes 172 sites along the bay that allow for hiking, boating and other recreational activities. 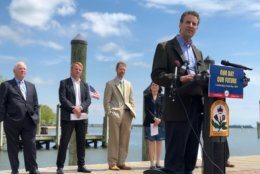 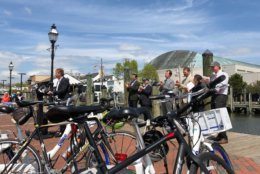 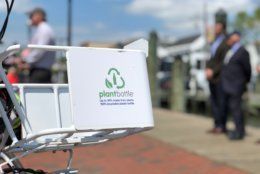 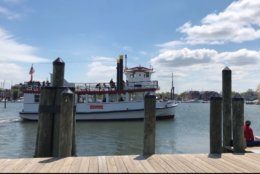 Cardin is seeking full funding of the Gateway program, which tops out at $3 million annually. The request will go before the Environment and Public Works Committee.

Cardin said the Gateway program isn’t as well-known as the effort to clean up the Chesapeake Bay, but it is critical. “It allows greater access to the bay, so people can really appreciate it, and therefore, support our efforts to make sure it’s there for future generations,” he said.

Sarbanes expanded on that point, saying, “A lot of people can see the bay, but getting to the bay is another matter.”

“You need the Gateway program to create these points of access,” he added.

Cardin and Sarbanes were also joined by leaders of environmental nonprofits, including Chesapeake Bay Foundation President Will Baker and Chesapeake Conservancy President and CEO Joel Dunn.

Baker recalled the first time he heard the slogan “Save the Bay,” and asked his dad if the bay was going to die. He said his father responded it could — without public support.

“The Chesapeake and its great rivers are as beautiful and as precious to the nation as the Grand Canyon, or Yellowstone, or Yosemite,” Dunn said.

Dunn added that the Gateway program helps people learn more about parks along the bay. “The program is critically important to getting people outdoors,” he said.

There are 12,000 miles of shoreline in the Chesapeake Bay watershed, but only 2% of that is accessible to the public, Dunn added.

“I don’t know about you, but I don’t own waterfront and I probably never will, so our public parks and access sites are critical for me to bring my family out to the Chesapeake Bay,” Dunn said.

“You’ve got to know something to love it,” Dunn said, and by fostering appreciation for the bay, he said the program ensures its protection.

At the same event, Pittman mentioned the creation of the county’s Citizens Environmental Commission. Under the executive order that formed the commission, an annual report on recommendations for environmental protections will be submitted to the county executive.