Maryland Gov. Larry Hogan pulled no punches Monday when commenting on the infamous pothole problem that plagues the Baltimore-Washington Parkway in Laurel, once again raising the idea that the state should take over maintenance of the federal parkway.

Hogan told FOX 5 that though the park service does well with parks, it does a “terrible job” of maintaining the B.W. Parkway, which has seen no substantive efforts to repair the cratered road surface because, as the Park Service said last week, “financial needs far outweigh available funding.”

“We want to improve the capacity all the way from Washington to Baltimore so that our taxpayers can get to and from work,” Hogan told FOX 5. “It’s outrageous and unacceptable. I mean we have potholes practically swallowing cars. They had to lower the speed limit because it’s so dangerous, and yet they are not fixing it.”

These D.C.-area potholes are unreal.🤦‍♀️😣

Have you ever seen them this big before? Here’s what #Chopper4 spotted along BW Parkway. Tag us in your tweets on how you feel about them … pic.twitter.com/vINanfsf4I

The National Park Service responded to the governor’s comments Tuesday, saying they have been planning on repaving the parkway from MD197 to MD198 this fall.

“We know this can’t wait. We’ve asked the Federal Highway Administration to expedite the contract to get this work done,”  said Jonathan Shafer, a spokesperson for the park service. “In the short term, we’re filling potholes every day weather allows.”

Shafer said repaving the parkway between MD197 to MD198 is one of the final phases of a multi-phase project to repave the entire Baltimore-Washington Parkway.

The recent controversy surrounding the poor condition of the southbound lanes of the B.W. Parkway south of Maryland Route 32 could serve as fuel for Hogan’s push to transfer control of the 32.5-mile parkway from the park service to the state.

In 2017, Hogan proposed new express toll lanes on the parkway, a move that would require the U.S. Interior Department to transfer the land to the state.

Veteran WTOP Traffic reporter Bob Marbourg said that solution may not necessarily be the cure-all.

“The state of Maryland already has a long list of projects, so taking on the B.W. Parkway is unlikely to benefit the state or the commuters,” Marbourg said.

Marbourg also recalled that in recent years, the park service paved the B.W. Parkway between Greenbelt, Maryland and the Patuxent River north of Route 197. However, the repaving stopped when the available funding did.

Earlier in the week, Sen. Mark Warner, D-Va., said the $11.9 billion nationwide backlog of National Park Service maintenance for roads and other needs shows the need for a nationwide solution.

“The longer we wait, the worse this backlog becomes,” Warner said in a statement.

This is absolutely absurd. The BW Parkway South after Rt. 32 is like driving on swiss cheese. I have never seen such a long stretch of road in this bad of a condition in the entire area. @nbcwashington @WTOPtraffic @wbaltv11 pic.twitter.com/avMlT41t4p

Sen. Chris Van Hollen, D-Md., called the conditions on the B.W. Parkway “unacceptable” when he wrote National Park Service acting Director Dan Smith on Friday, and asked for faster fixes than the full construction slated to begin in late summer.

“It is an unsafe situation that needs to be remedied immediately through expedited action by the National Park Service and its federal partners,” Van Hollen wrote.

Hogan has already suggested tolls along the B.W. Parkway. With tolls, the park service could generate enough money to fix the backlog of repairs on the George Washington Parkway, Suitland Parkway and B.W. Parkway within 15 years, according to a recent Pew report.

WTOP’s Hallie Mellendorf and Max Smith contributed to this report. 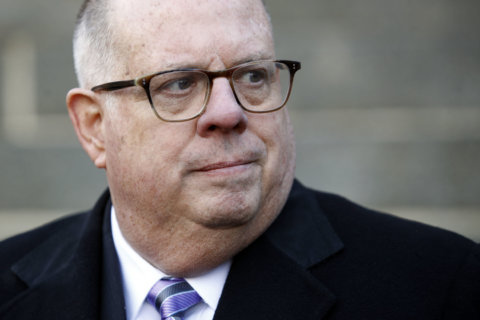