What matters most to Marylanders? Pocketbook issues

A new Goucher Poll asked Maryland residents about their opinions toward the direction of the state, the most important issue facing Maryland and their trust in state. Here are the results.
Listen now to WTOP News WTOP.com | Alexa | Google Home | WTOP App | 103.5 FM

WASHINGTON — Money matters most to Marylanders, according to a new Goucher Poll released Tuesday.

Twenty-one percent of the 808 residents surveyed put concerns about taxes, jobs and economic growth at the top of their list of concerns.

Sixteen percent put education at the top of the issues they cared about most, and another 12 percent mentioned crime and policing as the things they want addressed.

While pocketbook issues concern Maryland residents, they aren’t necessarily worried about the state of Maryland’s finances.

Sixty-one percent had a mostly positive view of the state economy, while 28 percent hold a mostly negative view.

Other issues that concern those surveyed: education, followed by crime and policing.

When it comes to judging the performance of those elected to address their concerns, Marylanders put more of their trust in their state leaders than in Congress: 73 percent said they could trust state government some or all of the time while just 34 percent said the same about Congress.

The poll has a margin of error of plus or minus 3.4 percent. 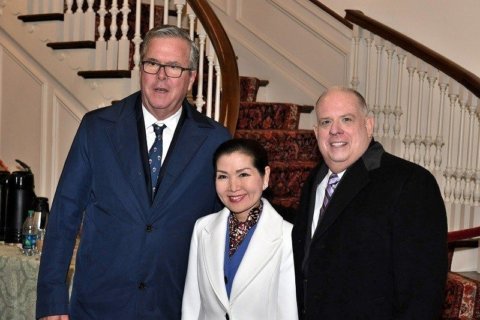 Poll: Marylanders solidly behind Hogan, but in no hurry for a Trump challenge