Relatives of those killed by Md. drunken drivers look to close law loophole

Maryland lawmakers want to close what they say is a gaping loophole in Noah’s Law. The legislation has required those convicted of drunken driving to have an ignition interlock device installed in their car.
Listen now to WTOP News WTOP.com | Alexa | Google Home | WTOP App | 103.5 FM

ANNAPOLIS — If a Maryland driver is convicted of drunken driving, they must have an ignition interlock device installed in their car.

That’s due to Noah’s Law, the 2016 legislation named for Noah Leotta, a Montgomery County police officer killed by a drunken driver in 2015.

But now, Maryland lawmakers say that despite Noah’s Law, there is a gaping loophole in the state, and they want to close it.

Under current law, if a driver pleads to a drunken-driving charge and gets probation before judgment (known as PBJ) they are not subject to that requirement. And they aren’t required to have the device — which measures blood-alcohol levels through the driver’s breath — installed in their cars.

“Dammit, they’re not protecting the community!” he exclaimed. “I can tell you firsthand. I’ve been in the courtroom — I see what’s going on.”

Leotta said he has a relative who was put on an ignition interlock device in a case that occurred after Noah’s death. The relative said that having the interlock prevented him from getting behind the wheel after drinking.

“By putting that interlock on, we’re not only saving the community, we’re saving the drunken driver,” Leotta said.

Helen Witty, national president of Mothers Against Drunk Driving, lost a teenage daughter to a drunken driver in Florida, and spoke in favor of the legislation.

“I have learned to live with the kind of sadness that you think will kill you,” she said as she spoke to reporters in Annapolis.

Witty and Leotta were with Lisa Spicknall, the executive director of MADD in Maryland, and they spoke in support of legislation to require that ignition interlock devices be installed as a condition for PBJs.

At a news conference in Annapolis, Howard County Del. Vanessa Atterbeary, a Democrat, said “we will continue to save lives and prevent more serious drunk-driving accidents” if the bill passes.

Montgomery County state Sen. William C. Smith agreed: “Interlocks work, and closing this critical loophole will make our roads safer here in Maryland, and will save lives,” he said.

Smith and Atterbeary are optimistic that the legislation could pass.

Atterbeary cited changes in leadership on the Maryland House panel that deals with judicial issues, and Smith said the influx of new lawmakers changes the political landscape in such a way that it would favor the bills.

“We will continue to save lives and prevent more serious drunk driving accidents” with passage of the legislation, Atterbeary said. 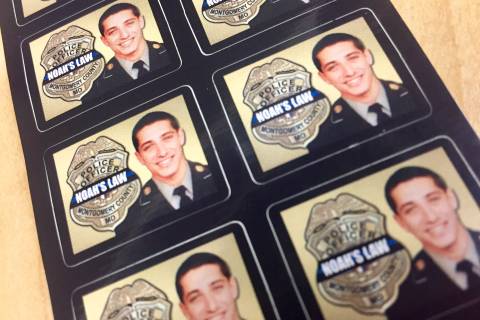